The Most Important Lesson I Learned In Sales 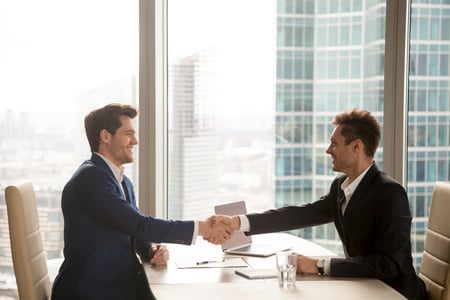 As a salesperson, your job is not to make sales.

Let me repeat that (with some emphasis). If you’re in sales, your job IS NOT to make sales.

Over the last couple of years, I’ve interviewed hundreds of salespeople as part of our Revenue Acceleration Assessment program. When I talk with them about how they see their role, they commonly respond with answers like “my job isn’t to sell, it’s to solve problems,” and those who do feel as though their job is to sell they virtually always add “but only when it’s a good fit for the customer.”

I believe that most of the salespeople who share these statements believe what they’re saying.

However, some components of the research we’ve conducted highlight conflicts with these statements:

Another data point that highlights this conflict is the stage at which lost opportunities are categorized as lost. The number and percentage of opportunities identified should be much higher in the early stages and slope down through the pipeline stage progression in a healthy process. This would demonstrate a salesperson who is focused on understanding and diagnosing problems first and seeking a strong customer fit. By eliminating opportunities early, salespeople free up the time and capacity to spend on higher-quality opportunities to increase the likelihood of higher quality sales. Our data shows that for most organizations, the opposite is true.

I don’t believe that this conflict is directly the fault of salespeople. The vast majority of salespeople that I’ve met or worked with are good, well-intentioned people. They aim to do good, and they take pride in the benefits they bring to their customers.

The Traditional Selling Playbook Is Flawed

Our field research has identified three causes for the conflict between what salespeople aim to do and how they behave:

1. The Scoreboard. If you ever doubt the influence a score has on behavior, just watch a bunch of 12 year-olds play any game before and after someone says, “Hey everybody, let’s keep score.” The scoring mechanisms that dominate sales teams today harm sales performance and sales velocity. The fundamental problem is that the way salespeople are measured and judged does not align with how they are supposed to behave.

2. Poorly Designed Sales Processes & Structures. The selling/buying process is ambiguous, complex, and dynamic. Without a robust sales process and structure in place to guide decision-making and actions, selling is like running a marathon while you’ve got a case of vertigo.

My Most Important Lesson

I still remember my first “real” sales job. I was selling furniture and appliances at Routzans Furniture Outlet in Frederick, MD. My first prospect came in to tell me that his television stopped working, and he needed a new TV. I showed him our lineup of televisions, shared the TVs’ features & benefits, highlighted the differences, and educated him on TV performance’s key elements. Forty-five minutes later, he thanked me and said he would go home and think about it.

Yup, my first sales interaction was with someone who needed a TV, came in to buy one, and failed to sell him one.

My manager came up to me after the prospect left, put his hand on my shoulder, and said, “Doug, you need to learn how to sell.” He led me to his desk and provided my first sales training experience. He gave me a Tom Hopkins tape set, How to Master the Art of Selling Anything. To say I consumed that set would be an understatement (I had to buy another batch because I broke the tapes from listening to them so much).

I learned that great sellers were the ones who closed early and often. I learned how to overcome 45 different objections and get to the “yes.”

And it worked — kind of. I performed, I even set a few records. I left Routzans, sold for a couple of well-known brands, and then started a consulting company with my family. I continued to perform very well as a salesperson. But it never felt right. And, while my numbers were always good, all the issues I shared at the start of this post were present.

Plus, I didn’t always like who I was when I was doing my job. You see, I thought my job was to get people to say “yes,” and to “sign on the line which is dotted.”

As I moved into sales leadership and sales management, I began to see even more vulnerabilities in the way I was selling. These included:

I knew something had to change.

The Power of No

Then one day, I was stuck at Houston International Airport waiting for one of their notorious storms to clear and had a Jerry Maguire epiphany. I was looking at everything the wrong way.

Rather than going for the “yes,” it would be far more powerful to go for the “no.”

In the dominant approach to selling, salespeople are taught to look for reasons that a prospect could/should do business with you. I realized that the problem with this approach is that I could identify and confirm 100 reasons that a prospect should buy, but if there was 1 meaningful reason that they shouldn’t (or couldn’t), they were unlikely to buy.

This is why handling objections was considered such an essential skill in sales. With a go for the yes approach, you’re unlikely to uncover the various reasons a prospect wouldn’t do business with you until the end. What’s more, the timing of that awareness puts the salesperson in a weaker position to educate or influence the situation.

After digging into the common objections/reasons not to do business with us, it became clear that most of these concerns were driven by misperceptions and misunderstandings that were better addressed earlier in the process. Managing them earlier provided two crucial benefits: they were easier to handle, and when issues that can’t be addressed are uncovered, no time is wasted.

The transformation was quick and easy. I just changed my mindset. Instead of looking for why someone should do business with us, I looked for reasons they wouldn’t. My dominant question became, “based upon what I know about this situation, what signs are present that could prevent this person or company from doing business with us?” Then I addressed these items proactively and transparently.

The difference was immediate and monumental. Prospects stopped “lying” to me (the reality is they were never lying to me, I was lying/deluding myself). I was treated as a partner/advisor rather than a vendor. My influence multiplied, and rather than manipulating my pathway to a sale; prospects provided the path to me. We stopped wasting time playing games and used that time to dig into how we could help them solve their problems (this often involved us “teaching” them what their problem was in the first place).

I could get out of situations that were unlikely to lead to a successful sale earlier and use that time to invest in higher quality opportunities to teach the problem, educate them on how to solve the problem best, and highlight why we were the best choice.

If Making A Sale Isn’t A Salesperson’s Job, What Is?

Before I answer this question, let me address an important point. Even if your job description doesn't include sales, that doesn’t mean that you’re not accountable & responsible for sales. If the sales team isn’t making sales, the company isn’t going to solve the problems they aim to solve. It’s a bit of a Catch-22.

I’ve shared many times that salespeople get far too much credit when a sale is made and far too much blame when one isn’t. You must have a strong offering, process, and structure that enables and accelerates salespeople’s ability to make sales.

Price Is An Excuse (Or, Why Salespeople Kill Their Own Profits)

Did you know that the word decide and homicide have the same Latin root?  They both mean “to kill.”...

Want to Shorten Your Sales Cycle? Start By Mapping The Decision Journey

One of the most common (and costly) mistakes that I see strong companies make is that they’re...

Quiz Time! Here are two outcomes: An opportunity in the sales pipeline was at an 80% probability...