There's A New Game, And Winning It Requires A New Mindset & Approach 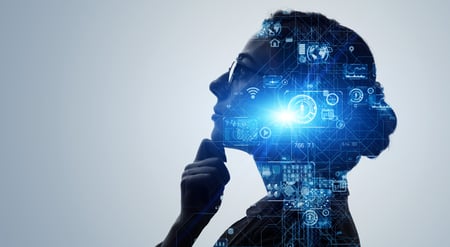 Note from the editor: The following post is an excerpt from The Revenue Acceleration Manifesto. You can read the full article here.

The game businesses are playing has changed. There are new rules, new risks, and new stakes. For decades businesses have paid lip service to the idea that the customer is everyone’s boss. Today your business better be taking that adage seriously. And I’ve got some news, our boss - the customer - is fickle, demanding, and often has unreasonable expectations.

Winning this new game requires a transformation in mindset and approach. 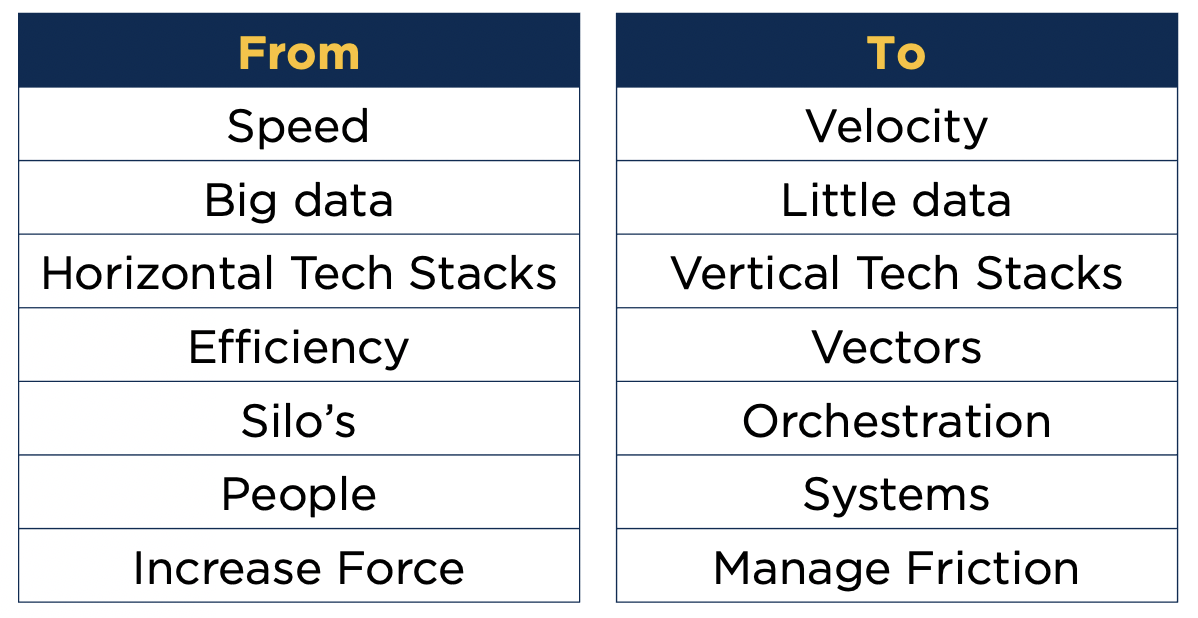 Speed is a measurement of how fast you’re moving, velocity measures how quickly you’re progressing towards a specific point. In the old game, it was good enough to be overly focused on speed. Today’s game is too complicated, dynamic, and nuanced for speed alone to get the job done.

In her book Thinking in Bets, author and former World Series of Poker Tournament of Champions winner Annie Duke shared that outcomes are determined by two variables: decision quality and luck. The only variable businesses can directly impact is decision quality. In the December 2013 Harvard Business Review article You May Not Need Big Data After All, the authors shared that data’s primary value is improving decision quality. While that statement may seem obvious, few companies are using it effectively. The authors called for an approach they call “evidence-based decision making.” We call it Hypothesis Driven Growth. Companies and individuals that embrace hypotheses-driven decision-making will accelerate velocity with less effort. Those that don’t will continually be forced to work harder for diminishing returns. 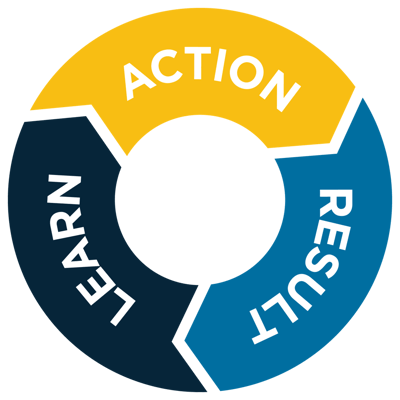 Here’s a Twitter post that, without meaning to, is the most accurate statement of the technology trend in sales and marketing over the last decade. This tweet aims to define the sales essentials, listing 12 applications - TWELVE!! I don’t know what’s worse, the fact that this only represents one segment of the sales, marketing, and success processes, or that I can quickly identify five applications that are missing. 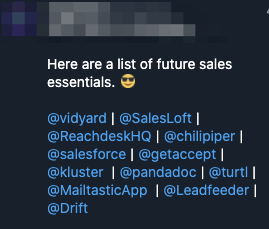 Here’s the reality, 99.8% of sales organizations don’t need 12 applications to accelerate their sales efforts. As technology budgets have exploded, company leaders realize that the only measurable impact these “investments” have generated is greater SaaS subscription costs. A few years ago, a study showed that their conversion rates went down as companies spent more on sales and marketing tech. In the new game, it’s not a question of how much technology you have; it’s a question of how are you utilizing the technology you do have?

From an obsession with efficiency to a focus on aligning vectors

Sales and marketing in the 21st century can be described as an obsessive pursuit of efficiency. It is undoubtedly true that many aspects of the customer and revenue acquisition and expansion areas are far less efficient than they should be. The problem is that organizations are pursuing efficiency as though the desired outcome/objective is greater efficiency. You can see it in the key metrics that increasingly dominate dashboards, reporting, comp plans, the implemented structures, and the tactics that permeate the entire process.

The current state today reminds me of the problems the manufacturing industry had to confront in the 1980s. Manufacturers used to obsess about efficiency too. As a result, they got good at being efficient. The problem they encountered was the more efficient they got, the more money they lost, and they became less responsive to changing circumstances, which multiplied the impact of those losses.

What the manufacturing industry learned is what sales organizations need to know to win in this new game. Efficiency is only a means; throughput should be the outcome/objective. Businesses must focus on aligning their vectors to account for and mitigate the various bottlenecks and constraints inherent in rich, complex, adaptive systems like the market.

Away from silos to orchestrated action

For most of the 20th-century, sales and marketing teams worked in clearly defined roles that, while complementary, were easily separated. Marketing was responsible for the early part of the customer acquisition process, and sales own the later part. The Internet and greater competition disrupted all of that, leading to a shift in how these groups worked. Rather than the linear path of old, they had to work more in a parallel manner. Despite all the rhetoric and content about sales and marketing alignment, these teams still operate, primarily as separate silos.

Winning the new game will require companies to position, market, and sell themselves in new, complex ways. The demands of the new game are far too much for mere alignment to be enough. The companies that win the game will see marketing and sales working in highly orchestrated ways. Managing such orchestration without it devolving into chaos or confusion will become one of the primary leadership demands.

Away from managing behavior to systems & design thinking

In their peak years, IBM built the greatest sales organization in the world’s history. They did it by creating a superior system, not by hiring superior salespeople. They followed the path recommended by Peter Drucker and built the genius into the system.

I’ve spent more than 30 years in the sales industry, working in just about every facet of the sales echelon. One of my most significant observations is that salespeople get far more credit than they deserve when sales are good and far too much blame when they’re not. I’ve learned that it’s far better to be an average salesperson in a superior system than a great salesperson in an average one.

The challenge presented by the new game is that the customer/revenue acquisition and expansion systems have become far more complex, dynamic, and adaptive. This makes building a sustainable system harder than ever. The winners of the new game will embrace systems and design thinking. In much the same way that business model innovation has been the primary competitive advantage for companies in the past decade, a complex systems approach will become a critical competitive advantage in the next. 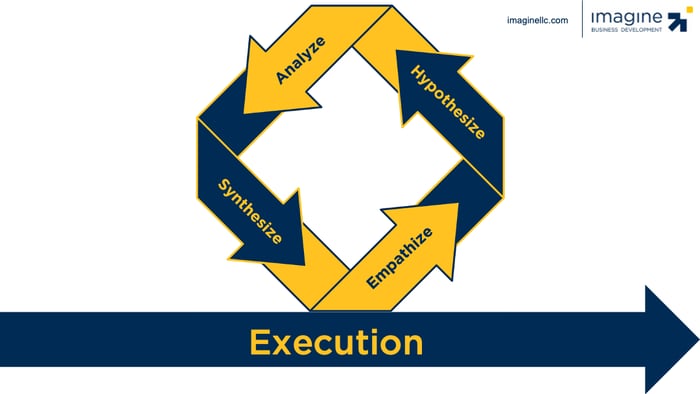 Less of “doing more” and More about managing friction

At Imagine, we like to talk about a companies growth efforts using the metaphor of a flywheel. Historically the go-to play of successful organizations was to increase the force used to move the flywheel. By and large, this has worked for the organizations that have done it well. The problem is that after some progress, increasing force reaches a diminishing point of returns. As you apply more and more force, gains diminish. 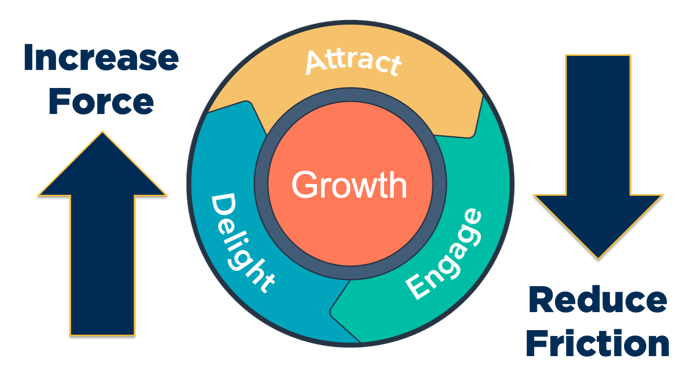 Why This Change Is No Longer Optional

Good or great used to be a choice, today it is not. Why Not?

Why We're Changing Our Approach to Serving Clients

For years I’ve come to this blog to write how customers and the world of sales and marketing are...

A new research report from SiriusDecisions presents a pretty damning view on the state of sales...