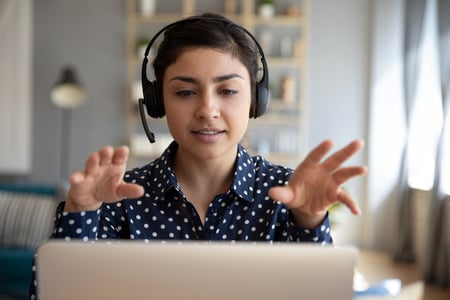 Each morning, I go into my home office, boot up my computer, put on my headset, and begin dialing. As I make calls, I never know exactly where or how I’ll catch people. Sometimes, there’s background noise; maybe they’re driving. Other times, they seem to be in the office, at work (many times, they’re “walking into a meeting”).

No matter where they are, by nature, my call is an interruption. By calling, I have seized part of their day. The way I navigate the 60 seconds following my intrusion into a prospect’s day is the difference between an immediate rejection and a meaningful conversation. If I can recognize that I’m hijacking a part of their day by calling at all, I can also recognize the importance of making the 5-10 minutes I spend with them worthwhile for both of us.

Prospects don’t choose to be called out of the blue. So, how do I turn an imposition into a conversation? I keep one word in mind: agency.

In sociology, the term “agency” refers to the ability of an individual to make choices for themselves. The thing I’ve been focusing on intensely in the last few weeks is giving my prospects agency in our conversations. And it’s working. I’m finding prospects are much more willing to talk when I give them some control of the conversation. This comes down to 2 things: the type of conversation and the quality of the questions being asked.

Doug, our CEO, has coached me on 4 different types of conversations:

In the first two call types, the prospect has very little agency. They’re sort of held hostage on a call that they hadn’t planned to take. How much time would you want to sacrifice to an interview or interrogative call? My guess is not much. That’s why it’s important to focus on having a conversation.

The difference between conducting an interview and having a conversation has a lot to do with how much agency a prospect is given. The goal of each  call is to ask questions, to learn about the company, and ultimately to discover their pain points. The trick is to really consider what questions to ask.

When you start to really think about what it is that you’re asking, you’re able to create a conversation that’s valuable for everyone involved. Doug has coached me quite a bit on asking great expanding questions. He says the three aspects of a good question are:

1. Framing the issue - This is about creating context with your questions. The more broad the question, the more difficult it is to answer. A good question is framed to reduce the number of possible answers. This gives the person being asked the ability to think more easily about a clear answer. When you are constructing your expanding questions, ask yourself, “what is the right way to frame this?”

2. Peel the onion - This refers to the different levels of questions. There are the surface-level “chit-chat” questions, intellectual questions, and emotional questions. Think about the way that the questions you’re asking are challenging the prospect to go deeper, and to consider problems they may not even know they have.

3. Educate - This touches back on the concept of an interview vs. a conversation. A bad sales question is a useless one, where neither party really learns anything from it. A passable question is one that informs the sales person. A good question educates both the prospect and the rep.

Each of these three pieces work together to make questions that give the prospect agency. It challenges them to think, and come up with honest answers. It also gives the salesperson the ability to guide the discussion. This is how a cold call transforms into a symbiotic interaction; how it becomes a meaningful conversation. If you’re going to interrupt someone’s day, (and the nature of our job is that we are interrupting) interrupt it meaningfully. Make it worthwhile. You have to be able to create value within the first couple of minutes of the interaction. Give your prospects the opportunity to really think for themselves and you’ll find that they’re much more open to talk.

Don't Interrupt - It's Not Polite

I am a raving fan of a coaching company that I have been a client of for more than eight years....

On the surface it sounds nice.  Combining Zappos.com with Amazon sure sounds like a powerful...