Why Your CRM Implementation Initiative Is Failing 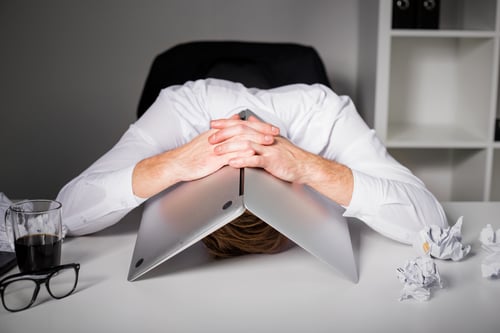 Last week, I was talking with a colleague and he was telling me about yet another bungled CRM implementation a client of his was dealing with. I have to admit I laughed a bit as he shared the story.

I’ve been using CRM in one form or another since the early 1990s (ACT! for DOS for those who are wondering). I started using Salesforce.com in the early 2000s. I’ve personally used more than a dozen CRMs in my time, and that number easily goes above 20 if you count the companies that I’ve advised.

I’ve been on the front-line of Salesforce automation for far, far longer than I care to think about, and the one thing that has remained constant has been the results:

A couple of years ago, CEB found that the average company was spending nearly $5,000/rep/year more on technology, and conversion rates have dropped by 12%. When I saw the study, I was actually surprised the numbers weren’t worse.

The investments in time, money, energy, lost focus, etc, in technology (and CRM is at the center of the issue, whether or not you’ve recently gone through an implementation) are not paying off. Most people haven’t noticed the size and urgency of the problem because technology has enabled companies to exponentially increase the volume of activities they undertake and this increase in activity has enabled masking of the underlying problem. A potentially even worse consequence is that this has built a new expectation of normal - do more, more, more. Of course, this leads to higher acquisition costs, historic employee stress levels, and greater financial manipulation.

Answering this question requires that you first consider what you define as “wrong.” By at least one measure, the dominant “best practices” approach to CRM implementations (and MarTech generally) is that there is nothing wrong. They produce a consistent & repeatable outcome so they are clearly doing what they’re designed to do. The only problem is that the outcome is almost always bad.

And that gets to the point of what’s wrong with “best practice” approaches to technology implementation & optimization. They’re poorly designed. The core problem is that they place focus on the technology, not the business process(es) and user(s). They (and the people who implement them) view technology as a solution.

To be clear, technology is not and never will be a solution. When used properly it is an enabler and even an accelerator for a solution, but it is not the solution. It’s a means to an end and should be treated as such.

Here’s an example of what I’m talking about. A few weeks ago I saw this article on a very popular sales blog that focused on the key elements to get salespeople to use the CRM every day. The article was referencing a specific CRM, so I generalized them here:

What’s wrong with these ideas? Frankly, nothing. They make total sense. They’re precisely what a smart group of people would come up with if they were charged with designing an approach to improve CRM utilization.

The only problem is that they don’t work. How do I know? Well, outside of the vast personal experience I have dealing with the rumble left by this approach, I also know they don’t work because if they did, companies would be delighted with their CRM.

There are three foundational problems with this approach:

The Goal Should Not Be CRM Utilization

To illustrate this point, let me tell you about two salespeople, Bob and Betty.

Whose job, Bob’s or Betty’s, is in greater jeopardy?

I don’t know what your answer is, but I do know that I’ve never seen a company that’s consistently growing above industry average that has fired Betty and I know many that have fired Bob. As a matter of fact, I know of several companies that managed the problem they were having with Betty by hiring her a dedicated assistant, so that Betty could spend even less time in the CRM.

So when you’re rolling out your CRM initiative, realize that your sales team isn’t really listening to you (or anyone else) who talks about the importance of “keeping the CRM updated.” Know that when you threaten the sales team with statements like “If you don’t keep the CRM up-to-date, you don’t get paid your commissions,” it sounds just like a threat from Dad that they would be grounded for a year.

Your sales team knows that the way to keep their job and enhance their lives (make more money) is by making more sales. Salespeople get rejected and deal with difficult people every day, so the reprimands they get for not keeping CRM up-to-date are annoying but don’t have very much impact. By the way, they’re typically not behaving this way because they’re trying to be difficult, it’s more that they’ve got a lot on their mind, a lot to do and change doesn’t come easy to them. Plus, most great salespeople I know have a complete and utter distaste for doing things that don’t make sense to them.

The goal of CRM implementation should be to enable salespeople to drive better outcomes with less effort. It should free them, not restrain them.

The Focus Should Never Be The Tool

I see it every day. We get asked to do it at least a few times every month. The question comes in like this, “Can you train our team on how to use the CRM better?”

My response to the question is almost always the same, “Why do they need to use the CRM better?” I won’t bore you with the answers.

I then shift the question track. It goes something like this:

I can promise you this, if you think your sales team isn’t using the CRM sufficiently the real problem is either that there’s a flaw in your sales process/sales performance program or the CRM isn’t designed for use.

The only time training the sales team on the CRM makes sense is when it’s directly connected to making their lives easier (so they don’t have to work as hard) to execute an effective sales program.

This brings us to what is far and away the biggest barrier to getting the sales team to use your CRM properly - it’s easier it do their job not using the CRM than it is to use the CRM.

Like it or not, humans are programmed to follow the path of least resistance. Any initiative that requires people to be “disciplined” regularly and to follow a path of greater resistance is virtually doomed from the beginning.

The CRM you choose should be the one that makes it easiest for your sales operations team to implement and maintain and for your sales team to use to drive greater sales performance. Make no mistake, this approach requires more work initially, but the payoff is that the CRM utilization conversations and reprimands virtually go away.

Will Wal-Mart’s Lust for “Gracie” Be Its Deadly Sin

The Washington Post has an excellent article on Wal-Mart’s plan to go “upscale.”

We All Need A Coach

I’ve always been fascinated by a key paradox of performance.  That is that top performers are...