Value Over Replacement of Salespeople

One of the things that I love about competitive sports is the ability to measure success.  Wins and losses...Hits...Errors...Goals scored...Goals given up...Averages...and on and on.

Those are the obvious ones.  If you've ever read the book Moneyball you know that the obvious numbers aren't always the best measurements.  Too often numbers like hits, runs or home runs measure correlation with success rather than causes.

Anyone who's spent any time analyzing the sales function quickly makes connections to the sports world.  We talk about wins, home runs etc.  But, how often do you really think about the value - the true value - your salespeople are creating for you?  Last year I wrote about an idea I called salesperson alpha.  Recently I've been thinking about another number.

In baseball (any surprise I'm referring to baseball Beth?) they use a measurement called wins over replacement (WAR).  WAR basically looks at a player and asks the question, “If this player got injured and their team had to replace them with a minor leaguer or someone from their bench, how much value would the team be losing?”  More and more, WAR is being used as a key measurement when negotiating player contracts.  And you'd may be surprised by some of the big names that have low numbers, and some anonymous names that have high numbers.

This is NOT an argument to pay salespeople less.  Quite the contrary, I think one of the major obstacles small and mid-market companies have in growing their business is that they underfund their sales function, and, as a result, get salespeople that don't drive real results and end up commoditizing themselves.

This IS an argument for maniacally assessing your people and acting upon those assessments.  We all need to take advice from Netflix's management philosophy: 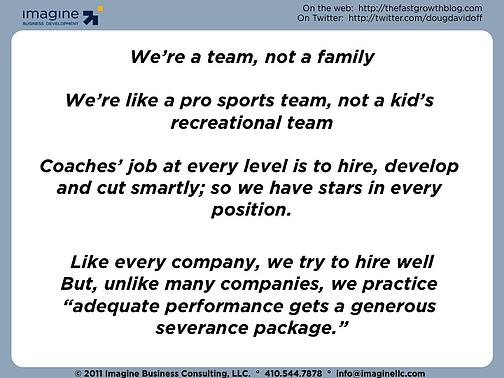 Selling Before The Buying Process Starts

The definition of a great salesperson – or a Demand Creator – is someone who can sell when there is...

Why Dell, IBM and Intel are Able to Sustain Growth, pt 2

My salespeople are too creative.

Wouldn't it be nice if we could go into a sales situation clearly knowing who is going to make the...