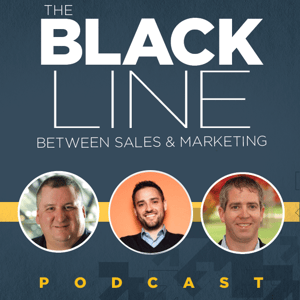 Lou describes frictionless selling as a way of rethinking sales to make sure you're doing things the most convenient way for both the buyer and seller. What underpins that is the fact that we're all looking for more convenience in everything we do. Mike agrees, but then poses the question: aren't the really good sales reps already trying to reduce the friction of the buyer? Doug also chimes in with asking whether or not this process is for the back end management, front end or both? Frictionless selling is more of a mindset, but the strongest aspect deals with the back end. After conducting research, HubSpot identified a big coaching gap - 50% of sales reps feel like they're being coached, but 82% of managers say they're coaching...so someone has to be lying, right? Those numbers, as you'll see and hear, shocked both Mike and Doug.

The other question here is; is friction bad? Lou explains that not all friction is bad and some is actually needed, but there needs to be a balance between the two. In today's world, the worst thing we could do with frictionless selling is take the human out of it altogether. Doug's point was that he was all in on eliminating the static and things that get in the way type of friction, but we have to learn the differentiation between what's valuable friction and what needs to be eliminated. Ultimately, you have to take this concept one step at a time and start small with it by reading resources (specifically at frictionlessselling.com) and see how you can start changing your mindset and possibly how you go about the rest of your career.

Episode 31: Should you be Opaque with Pricing?

Mike decided to take the pricing page off of his website, because of how it was affecting the...