The Attributes of Companies That Scale Growth 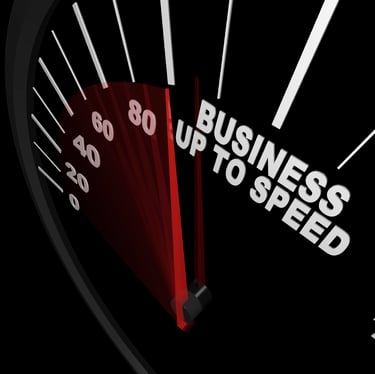 Five years ago, the team at Imagine paused to take a deep look at what we were doing, and more importantly, why we were doing it. At the time, our primary focus was sales process design, sales advisory and coaching.

We found that as we worked with our clients and their sales teams, regardless of what they were doing, growth was more difficult, less predictable and more disruptive. They were seeing success, but we weren’t seeing the leverage in results that we expected or experienced historically.

We knew there were companies, regardless of the economy, that were scaling growth and experiencing record-breaking profits. So we decided to study the situation. We embarked on a fairly in-depth review to uncover what those companies who were able to scale growth were doing, that other companies were not.

Before I share the findings that have guided our actions since that time, let me take a moment to talk about what I mean when I say scale. For some organizations, scaling means moving from startup to $100 million revenue and then to $1 billion within a decade. For others, it means predictably breaking through growth barriers, while enhancing the profit profile and enterprise value of the organization.

When I talk about scaling growth, I really mean growing in a predictable and sustainable way, that both meets the objectives of the organization and isn’t overly disruptive.

Successfully scaling growth certainly requires more than just an effective revenue growth program. The right systems, technology and people are critical to success. Those areas are not our expertise and we feel that there are others far more qualified to share their thoughts. Our findings are focused on the growth and go-to-market side of the organization. 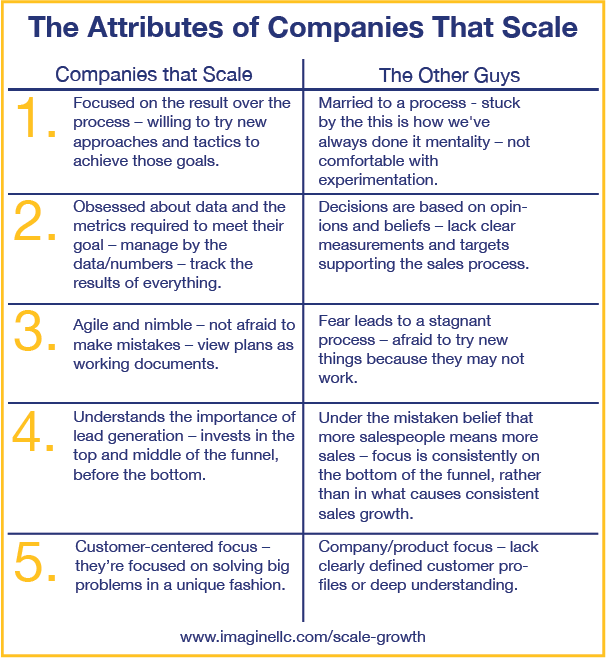 Companies that scale certainly have excellent processes, but their focus isn’t on the process. Rather it’s on the results they’re striving to achieve. This means that they’re far more willing to experiment than average (and even above average) companies are. They adapt quickly, and are willing to throw out things that worked when they discover something better.

In contrast, companies that struggle breaking through growth barriers are more wed to their process. While they talk (a lot) about the results they want, they’re less likely to try something “until it’s proven.” Further, when they do try something, they’re less likely to let it go if they find it’s not driving the intended result (or an unexpected consequence is worse than expected).

2.  A maniacal focus on data, metrics and tracking.

Successful growth companies are obsessed with data. They measure and track everything. While they don’t let a lack of data prevent them from trying something, they waste no time in measuring the impact of the actions they take.

This is probably why they’re so much more willing to experiment. They manage by the numbers, and allow data (rather than opinions) to tell the story and guide their actions going forward.

If you want to excite a scalable growth team leader, tell them you’ve got insights into improving their growth formula. In contrast, other companies don’t measure or track religiously. Sure, they may have a dashboard and some KPI’s, but ask them how many leads they need to create a sale, what their churn rate is, or how many calls it takes to advance a sale and you’ll get a lot of story and explanation, but no numbers. Worse yet, opinions and beliefs guide the decisions and actions that the company takes.

Successfully growing a company at a fast rate is not an exercise in straight-line process. Growth is messy, and the reality is that you’ll be wrong far more often than right.

Fast growth companies have a comfort level with mistakes that their counterparts don’t. Our research found that there are two primary reasons for this:

4.  A BIG focus on lead generation.

As we moved to the tactical arena, we found the biggest difference was how scalable companies approach lead generation. These fast growth companies invested heavily in building the top and middle of their funnels. They realized that you can’t have predictable growth without predictable lead generation.

If you want to grow revenue by 20%, you’re going to have to grow leads by 500% to 1,000% (and sometimes more). Further, they built out the systems to efficiently manage this volume of leads.

In contrast, their counterparts focus more on the bottom of the funnel. Where scalable companies invested in sales development and SDRs, average companies simply hired more salespeople.

5.  They think big about problems.

HubSpot wanted to fundamentally change how companies go-to-market. InsideView wants to change how sales organizations gather and utilize data and intelligence in the sales process. Salesforce.com wanted to eliminate the need for software.

Scalable companies obsess about big problems. Sure, they want to make money (a lot of money), and they understand that to do so they have to understand a problem better than anyone, and put all their energy into solving that problem for a specific group of people. Simon Sinek calls these companies “Why-Based Companies.”

Their counterparts focused instead on their offerings. They never defined who they wanted to be a hero for. They don’t spend the energy necessary to understand their customers better than their customers understand themselves. As a result, these companies are commoditized and struggle to sustain growth.

What’s more, companies that scale know the job is never done. They’re running marathons at a sprinter’s speed. They know that yesterday’s success means little or nothing today. So they’re always learning…and testing and measuring.

I understand the temptation to lie.   If you're a small company, you want people to think your...

Let me share what, in hindsight, is an obvious lesson.  People work to solve their problems with or...

5 Tips to Re-engage a Stalled Sale