Joe Maddon, the manager of the Chicago Cubs (who are threatening to make the playoffs for the first time since 2008), is fond of saying “Our goal on a day-to-day basis is not to win games. Rather it’s on executing our game plan and process.”  Maddon believes (and I agree) that bad things happen when the focus is on the result (which you have limited control over) rather than on executing effectively.

I was reminded of this when Peter Caputa, Vice President of Sales at HubSpot, posed this question to a group of sales advisors on Twitter last night: 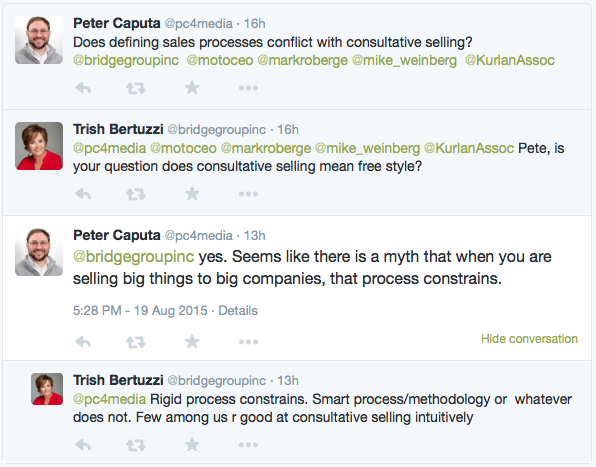 I often hear similar concerns from salespeople and audiences that I speak with. And while this question deals directly with the sales process, I see the same resistance from company executives when it comes to laying out a process for growth. I often hear things like:

I could go on, but the bottom line is that all of these concerns and questions stem from the idea that process constrains. And what’s so absolutely sad about this commonly held belief is that it is so wrong. Good process unlocks creativity and genius – it does not constrain it.

Regardless of pursuit or discipline, I guarantee you that if you show me someone who performs at a top level consistently, I’ll show you someone who relies on process to make it happen. Baseball, football, theater, consulting, the arts, whatever; process is the key to unlocking the ability to repeat top performance.

That’s not to say that process, in and of itself, is the cause for success. Process fails for one of two reasons:

The truth is that there are far more bad processes at play than there are good ones. Bad processes typically fall into one of two camps.

A series of statements, philosophies or beliefs are not a process. Additionally, just because something is a series of steps does not make it a process (at least in the way in which I am referring to process). A great example of an ineffective vague process is the traditional 7-step sales process:

While these steps give the illusion of “process,” the reality is that they don’t mean anything. They provide no real clue to guide the actions of the parties involved. (Additionally, these steps are so far out of alignment with how prospects buy today that it has been rendered useless – though somehow it continues to live in various manifestations within many sales organizations.)

Because of this lack of clarity and discipline, the process quickly loses relevance and salespeople resort to wildcarding on their own.

In the twitter conversation I noted above, Trish Bertuzzi points out that rigid process constrains and she is on-point with that observation. We are currently working with a client designing their sales playbook to address this very problem.

Their sales process attempted to account for everything and every possible situation. The result was an overly complex, rigid process that was all but impossible to stick to. Worse than that, it took the creativity out of the effort. Needless to say, it was not effective.

I do a workshop (and wrote an eBook) on Achieving Effortless Sales Growth. When I first talk about effortless, I am greeted with a lot of cynicism. I then point out that when someone achieves a state of peak performance, the results come effortlessly. I then remind the audience that it takes a tremendous amount of practice, discipline and commitment to make things effortless.

This is the essence of effective process. Yes, it’s easier for a practitioner to just let things happen and to wing it. It’s easier to create vague plans filled with goals, platitudes and affirmations and then deal with things as they come. Easier, but far, far less effective.

It takes time, energy and effort to create and master a real process. This is the primary reason that organizations don’t commit to it.

At the end of the day, predictable success is all about “the plumbing.” Vision is great and tactics can be wonderful; however, it’s the how that is the difference between repeatable success and failure. Process, like plumbing, isn’t sexy and no associations give awards for the best corporate plumbing, but for repeatable results, you’d better focus on the process.

We spend a lot of time working on process – for ourselves and for our clients. Through that time I’ve developed four rules for assessing, creating and managing process.

It Must Align with The Real World

A common cause of ineffective process is that it is created in a vacuum. It describes how we’d like things to be, rather than how they are. When developing process, you must take into account:

This is why an effective process in one organization is totally ineffective in another. It’s also why so many sales and marketing processes are failing.

It Must Clearly Answer the Question “How Are You Going to Do It?”

When I was with Merrill Lynch, I was at the leading edge of wealth management, and the formation of teams to deliver services to clients. I worked with two others who became part of my team and the time had come for us to present our business plan to management.

We clearly laid out our mission and purpose, communicated our SWOT and laid out the goals that would lead us on the path to world domination. We were confident we were going to blow management away with our plan. Then, one of the Sr. VP’s asked us a simple question that stopped me in my tracks. The question was, “How are you going to do that (hit your goals)?”

I initially answered the question with confidence. “We’re going to reach out to high-net worth individuals, communicating our core value proposition around comprehensive wealth blah, blah, blah…”

He responded to our answer quite directly, “Doug, that’s crap. It’s a bunch of platitudes. It doesn’t tell me how you’re actually going to achieve your goals. I won’t know if you’re doing the right things, and you won’t know either. Come back when you can answer this question in a meaningful way.”

I did, and it’s changed the way I do things ever since. Like good communication, good process communicates the how not in a way that can be understood, but in a way that can’t be misunderstood. This is crucial, because anything less means that when the unexpected happens, those involved in the effort won’t behave as one. Everyone will be left to their own interpretation and the effort will drag.

It Should Serve as a GPS-type Tool

A good process provides those people involved the crucial context needed to effectively interpret actions and know what needs to be done. A strong process builds the genius into the system, unlocking the genius of those that are involved in it.

It’s no wonder that coaches like Bill Belichek or Joe Maddon are able to replicate success so consistently (deflated footballs notwithstanding). They both put a strong process above individual talent (though talent is still very important) and seek to match the talent to their process. Additionally, they’ve both demonstrated the ability to adjust the process as things change (see rule one on alignment).

It Should Be Strong and Flexible

An effective process is strong enough to stand up in a complex world, yet flexible enough to allow different styles and personalities to succeed within it. This is my last test of process. If the process limits who can be successful too much, then it must be more flexible. If it requires too much individual interpretation to succeed, then it’s not strong enough.

Creating strong process is probably the most difficult endeavor any business or leader will be involved in. It takes time, expertise and collaboration to work. The payoff is the ability to consistently and predictably perform at a high level.

Creating Value In The Sales Process

Ten years ago I started my company with a challenge to all sales leaders. I asked that they look at...

I was talking with the VP sales with a prospect recently, asking how they managed their funnel. His...

How To Design Your B2B Prospecting Approach to Achieve Consistent, High Value Results

A couple of weeks ago, I was asked a question in a forum I participate in about how we build our...