Prior to getting into the meat of the episode, Doug starts us off today with a light motif. He plays the song Mr. Blue Sky by ELO since they’re going to get into some surface level information on Red Work and Blue Work. The main, overarching topic though is about how people are messing up (or f-ing up) RevOps because they’re always looking at things through the lens of efficiency. To get straight into it, Doug despises the term “game change” because too often people say something is a game changer, yet continue to play the same game. Revenue operations is not a game changer, but more a game accelerator. We’re seeing a bandwagon effect where people jump on without understanding or committing to what the real change is. This turns into something similar to a fad diet. You lose weight right away, but you inevitably gain it back and make your body more resistant.

Far too many organizations are still committed to that winding path that is efficiency. If you take RevOps and apply it within an efficiency mindset you may get incremental improvement, but you’ll also be reinforcing the efficiency trap – becoming addicted and obsessed with efficiency.

The 21st century to Doug is all about adaptability and resilience. Doug isn’t saying that focusing on efficiency is bad. He’s saying that efficiency is increasingly not going to be the reason you are successful.

In April of 2020 people walked into the grocery store and there was no toilet paper. Now you walk in and there’s no baby formula. These are great examples of what happens when there’s a dependence on one provider in one location with highly specialized machines to do one specific thing.

Another example of this is how marketing gurus love to say never copy by committee/never design by committee. They’re saying don’t make decisions by consensus and Doug agrees. He says all the time that a camel is a horse made by committee, but how many horses do you see in the desert? Camels are adaptable and resilient.

One of our foundational books for the Imagine Operating System is Leadership is Language by David Marquet where he talks about red work and blue work. (More on this later.)

Why do you think there is such a focus on efficiency?

Firstly this obsession isn’t just for RevOps, it’s a business obsession. Part of the reason is because that’s the legacy playbook that we’ve been playing for 50+ years. The other thing is that efficiency has a lot of speed and is easy to measure, and it feels right. We want to make things simple, which is an efficient mindset.

Another word for efficiency that’s really hot in our space right now is friction. Eliminating friction or reducing friction is being more efficient. This is seen applied when there’s a problem with technology and people want to keep things simple. The implementation is simple, but then you have little bits of friction all the time.

Take a look at Amazon. They’re contracting out and using that as a shield. That’s a great example of red work and blue work. Amazon is taking advantage of what they can take advantage of. They have a lot of blue work that goes on.

Before we dig in further what does red work and blue work mean?

If we think about the underlying model of business, there’s two types of work that get done. There’s the thinking work, the planning work, the designing work. That was the job of management. And then there are the front-line employees. Back in the day with Henry Ford, for instance, what made them so efficient was that it was the right play at the time. A small group of people did the thinking and a larger group did the doing. This idea is still taught today through the idea of management. They do the thinking and planning then hand it off for execution.

Blue work is thinking and planning. Blue work is where decisions are made. Red work is the actual doing. Everything that gets done has a combination of blue work and red work.

One thing Doug is seeing is that RevOps is getting a red work mindset. That’s why adoption and utilization are so difficult and that’s why if you don’t have a really strong business process documented, you’ll end up with a really vague CRM.

HOT TAKE: Doug thinks salespeople are less good today, but it isn’t their fault to a large degree. Salespeople are far smarter today than years prior because they have access to far more information and insight. But they show up dumber. Why is that? When the machine does all of the work for you, you don’t really understand it. When Doug had to do research he would go to this place called the library and look through small laminates of newspapers and take notes. It’s super efficient when the machine does all the work for you, but in the end it’s about understanding what’s going on. Today salespeople are turning into a bunch of sales bots. They don’t do the blue work anymore.

An element of blue work is thinking and deciding. Going back to a previous episode that Jess and Doug did on the admin, we want the admin to be the decider. NO! That means you just turned everyone else into red work only. What RevOps job is more than anything else is that they need to be masters of context. They need to ensure the proper context exists so that decisions are distributed. By the way, a distributed decision is not efficient. It requires lots of conversation.

In college, Doug was on the debate team and went up against Harvard and the Naval Academy and beat both of them. How? Why? The debate he was in, he always tried to find a twist. He started making arguments that were not typical. What he found was that when he was on the opposing side, he had a lot less information but knew everything that he had because he was the one that did the research. And he knew how to apply it. The other teams only knew how to access it, so they couldn’t make the adjustment to his argument. They would claim that his argument violated the topic. The other teams were extremely efficient and far more intelligent. They had far more resources, but the moment something changed, they had no adaptability. They didn’t do the blue work.

Our second principle of radical execution is that agency is a requirement. That means you have to have control. What we’re seeing from a revenue operations standpoint is that people are beginning to address surface symptoms as a lack of efficiency. Their processes are becoming more robust, but challenge yourself. You’re more robust, but are you more adaptable and more resilient? 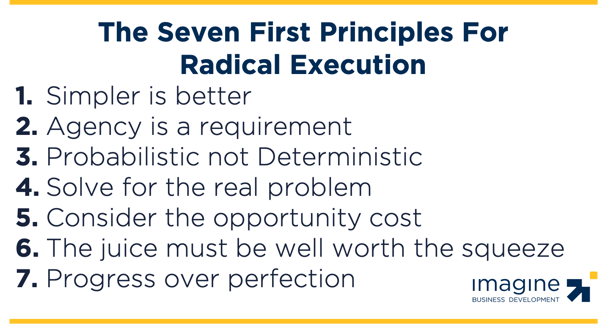