Jess and Doug were kicked out of the studio! Well, it isn’t that serious, there’s just some construction going on this week that will be solved come next episode. So for everyone that watches the video, don’t worry, the beloved studio background will be back next week. Despite that, Jess and Doug are diving into The 3 Zones of Execution. What are The 3 Zones of Execution?

Disclaimer: This is not a fully original idea. Some of it comes from a McKinsey model, the three horizons, and some of it comes from Geoffrey Moore’s book Zone to Win. It’s a model about innovation that we put our own twist on. And our twist comes from real, firsthand, in the field implementation.

The human conscious mind doesn’t do well with nuance and this applies to the perception of time. There are only three times that we physically understand: before, now, and later or past, present, and future. What we have to realize and accept is that we’ve created lots of verbiage to sound as though we have moved beyond our reptilian brains from an action perspective. We’re not as different as we would like to think.

When you talk about small mid-market companies where they are resource constrained, no one can be fully future focused. When it comes to implementing change, we use the zones less from the standpoint of innovation theory to manage execution and the change required.

Good is no longer good enough. The truth is most businesses went through their entire life without ever actually needing a transformation. Today it’s safe to say, if you’re not transforming, you’re dying.

What we’ve done from the McKinsey model is we’ve changed the timeframe to make it more about execution.

Zone One is the Performance Zone. Zone Two is the Enablement Zone. Zone Three is the Transformation Zone.

If you’re talking about innovation and large companies, some of the zones from other models don’t apply, and they certainly don’t apply from a RevOps perspective. RevOps is a Zone Two discipline in the Enablement Zone.

Zone One, the next 90 days, the Performance Zone, is all about hitting numbers and meeting objectives. This zone is where you have to get shit done. You have to hit numbers, meet objectives, pay bills, close sales, finish things, etc.

The Enablement Zone is about staging, operationalizing, systemizing, and optimizing. Staging is a key part because if you talk to most people in a frontline position as a company scales, the number one issue that is complained about is that things are always changing. People can’t perform at their best when they don’t feel stable.

When you go through the Transformation, you lift your head up and look back and can see how things have changed, but that it never felt like anything was massively changing. The three zones allow for shifting without it seeming like craziness. They bring in order to the chaos of riding the tornado of growth.

How do you build a bridge between performance and transformation? What are the things you do to enable your team?

How clear is your destination? Where are you trying to be qualitative and quantitative in a year, in three years and beyond? When we look at a year or even three years, we treat those like the finish line, or the next starting line. The reality is that it’s neither of those things; it’s a waypoint.

When your vision becomes more clear, it actually feels less like vision because vision is an intangible thing. So when it becomes tangible it’s no longer visionary.

How did we create an Enablement Zone? You don’t have to do anything because we could debate all day over the time frame. There are some companies that have a Performance Zone of 30 days.

The mistake Doug sees with the Enablement and Performance Zones are that people think they are one in the same. By doing this you aren’t able to easily separate out urgent vs. non urgent items. Simply thinking along the lines of, “Is this a Performance Zone issue, an Enablement Zone issue, or a Transformation Zone issue,” will have a dramatic effect.

Could you be utilizing all three zones simultaneously depending on what you’re working on?

No, Doug doesn’t think they can be utilized simultaneously, though multiple people can be in different zones at the same time. 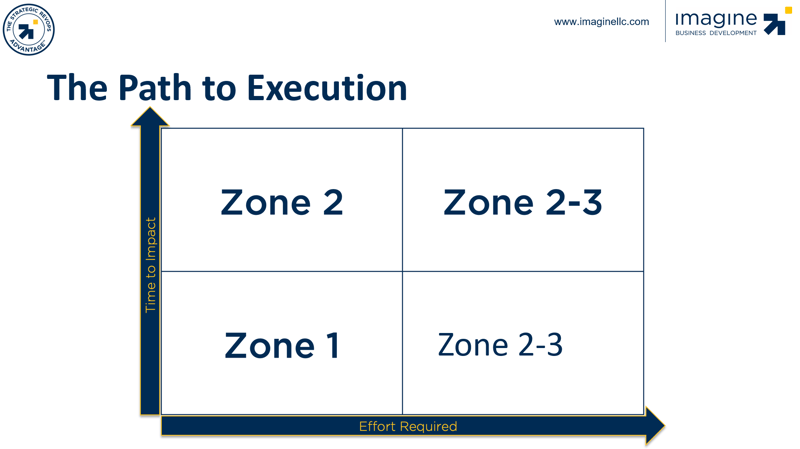 What are some of the challenges you run into in each zone?

The first challenge is that this is a framework; a model. This isn’t reality

If there are a few things you take away from this episode it’s that if you are changing your state of mind, you should be thinking about what zone things belong in. Not everything is going to fit into a singular box, but it will help you distinguish priority.