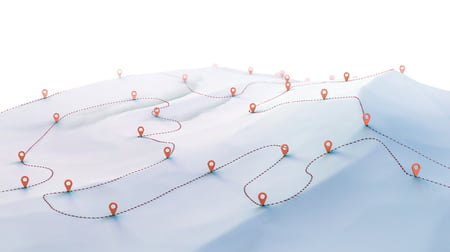 As you may have noticed, the past couple of years have been a wild ride for businesses and, if forecasts are accurate, that unpredictability is almost guaranteed to continue. After all, the supply chain remains vulnerable, interest rates are up, inflation continues to rise both domestically and globally, a new covid variant is on the upswing, and energy prices are all over the map. Everyone can agree that these are unprecedented times.

But it’s not all doom and gloom. One of the most important ways companies can prepare for continued uncertainty is to focus on building resilience.

Just as business in the twentieth century focused on efficiency, I believe the twenty-first century is going to be all about resilience. The people and companies that will perform the best will be the most resilient.

People define resilience differently, but I believe it’s about maximizing the rate of learning and gaining the ability to apply those learnings. The best way to do that is to chart a course and make purposeful adjustments as they become necessary. This is not easy even in the best of times, and is even harder in times of global disarray. (That’s why I wrote an entire ebook about succeeding in turbulent times.)

How RevOps Helps You Play the Game Better

What RevOps does is create the clarity to enable learning which, in turn, enables the adaptability and flexibility that moves you further along your intended course. This clarity becomes especially important as the world changes.

I’m not saying you won’t have sales without RevOps—because you will. That’s the law of averages. I’m also not implying that RevOps is some kind of infallible authority that will magically solve all your problems.

But what RevOps will do is help you to play the game better. That’s because RevOps enables what I like to call an outsider’s view. Since RevOps is not sales or marketing or customer success, it’s effectively an “outsider,” which grants it the ability to help other departments optimize effectiveness.

It’s my belief—and I’ve seen it proven time and time again—what actually gets you closest to reality in business is a balance of the outsider's view with the insider's view.

That’s because, as Gödel’s second incompleteness theorem states: It’s impossible to judge a system from within the system. In other words, when you're so deeply involved in the details, you can't see the forest for the trees. You can't get the necessary context.

And while it may seem counter-intuitive, success can actually make you less resilient. Success has the physical effect of hardening neural pathways. That effectively makes us more resistant to thinking differently—which is great when we're dealing with the exact same situation. However,  when change occurs, people whip out the same playbook and often don't recognize that a formerly successful play won’t work this time—until it's too late.

RevOps Allows Your Employees to Focus on What They Do Best

Change is where RevOps helps maximize the rate of learning across your organization. It creates the type of focus that enables orchestrated action and greater velocity. It puts constraints in place so your employees can concentrate on what they do best—their area of expertise—without reinventing the wheel each time. After all, if each department only focuses on its own concern, rather than the bigger picture, the result over time will be misalignment.

By the way, that misalignment is why a myth about silos being “bad” has sprung up. Silos, or areas of vertical expertise, aren’t inherently bad, but without overarching constraints, they can result in a loss of momentum.

Unless those constraints are formalized and built into your structure via RevOps, the only thing keeping a structure in place is willpower. While employees can maintain that for a while, that resolve will inevitably fracture over time, as people get too busy or leave the company. (To read more about this, check out our blog about the importance of system design.)

And here’s the thing—every business has some sort of RevOps in place, even if it’s rudimentary and completely unofficial. For example, if you’re setting up an email tool, that is a revenue operations function.

Formalizing RevOps Takes Your Business to the Next Level

What makes the difference is purposefully managing RevOps as a discipline, because that brings a different, helpful perspective. RevOps often flies under the radar, so when it’s working best, it—ironically—appears completely unnecessary. When it’s not working, you definitely notice.

In everyday terms, if you watch any type of high-performing group—say, an improv team, a jazz ensemble, or a football team—you'll see an orchestration or a pattern. There's a flow and a communication. There's something indefinable happening between all of the parties or players. It is often amazing to witness because it results in a truly unique outcome. By unique, I mean the particular experience will never happen again. But the irony is that the “never happening again” experience occurs again and again in different but equally astonishing permutations.

When you see a skilled wide receiver who makes an incredible catch, he'll never make that exact catch again—but he will make another amazing catch. That’s where mastery comes in. Successful teams have members that excel individually but also have a collective flow, due to mastery and learning.

You may have noticed that I love sports analogies, so here’s another: when I coached college baseball, the team members enjoyed lifting weights—maybe even more than they enjoyed playing baseball. That was in large part because it upped their dating appeal. But left to their own devices, the players would work only the major muscle groups, because that’s what made them look good. As a result, there'd be an imbalance between the big muscle groups and the small muscle groups. Their front looked great, but their back was weaker than a six-month-old baby and that resulted in constant injuries.

That’s how I like to think of revenue operations—as working on the invisible that’s just as necessary as the visible. In business terms, it’s the enablement zone that bridges strategy to execution.

Why RevOps Is More Crucial Than Ever Before

RevOps is about keeping one eye on the vision of the future and one on what's happening today; that allows you to adapt to change without feeling like it’s constant and unsettling. That creates stability that enables your business to change and excel.

With an effective RevOps program in place, you are able to look back at what you were doing over the last year and think, “How did we get from there to here?!”  The beauty is that you never felt like you were doing anything that differently.

I truly believe that RevOps done right creates a feeling of stability, even in unstable times. That feeling of freedom allows your employees to focus on their area of expertise without feeling like the sands under their feet are constantly shifting. That builds resilience for both your employees and your business—and there will be nothing more crucial for success in the years ahead.

Growth is the business imperative of the 21st century. Cover stories on magazines as diverse as The...

You wouldn't know there's a new world going on in marketing if you were stuck to the phone making...

InsightSquared Review: Our Choice For An Efficient RevOps Platform

“Revenue Operations” or “RevOps”. If you haven’t seen or heard the phrase by now...Well, then this...