Price Is An Excuse (Or, Why Salespeople Kill Their Own Profits) 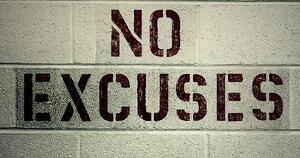 Did you know that the word decide and homicide have the same Latin root?  They both mean “to kill.”  When you make a decision you're “killing” the alternatives.

When viewed through this lens, it is no surprise that people struggle to actually make decisions.  As a salesperson, it’s important to keep this in mind in terms of how you deal with the issues surrounding price.

Think about this for a moment, in a sales situation, when does pricing typically come up?  At the same time you are asking your customer/prospect to make a decision.

Now, think about the last time you made a major decision, one that had some risk attached to it.  Think about those moments as you were deciding to move ahead.  How did you feel?  What emotions were you experiencing?

While I’m sure there was some excitement, it was probably mixed with a lot of stress, anxiety and doubt.  It’s not unusual for people to get that “pit in their stomach feeling,” where all they want to do is focus on something else.  This is true even when the decision will provide great benefit to them.

This feeling is natural and it’s wired into our biochemistry.  When you add the complexities associated with making such business decisions, the underlying fear of simply making a decision is heightened.

What’s the natural human response to fear?  Fight or flight.

And, that’s where the vast majority of pricing issues present themselves.  Objecting to price, pushing a price negotiation or any number of other challenges surrounding price is a natural focus for dealing with such fear, as it fulfills both the desire for flight (if I push on price it will delay the need to make a decision right now) and for fight (if I push on price I will feel more in control).

It is for this reason that price is most often used as an excuse to delay making a decision, rather than as a true barrier to action.  Oh yeah, one more thing.  Poor selling has taught buyers that if they wait until the end of the process and throw a price objection into the mix, most sellers will capitulate.  Buyers know that sellers are dealing with quotas, hitting numbers and the fact that sellers tend to count their chickens before they’re hatched.

There’s one more reason that price issues are misunderstood by sellers.  Humans are interesting creatures.  Our emotions have far more control over us than we would care to admit, and one of those controlling emotions is the need for a feeling of equity.  Simply put, we want things to be fair and we don’t want to be taken advantage of.

Poor selling combined with the proliferation of information through the Internet has caused us to be paranoid that we’re getting ripped off.  We all want that special price, and we’re scared we’re going to learn about someone who gets the same service for 20% less.

Oftentimes when a customer/prospect is asking/objecting about prices, what they’re really looking for is a solid floor.  They want to know that they got the best deal they could get.  They want to be able to look at their boss, co-workers, spouse and friends and say they got a fair deal.  Oftentimes, the best thing a seller can do is to simply be clear that this is the price and that no further negotiation is possible.

If you want to know how to eliminate the price objection, and end the constant negotiation and haggling that plagues so many sales efforts today, come back tomorrow when I will share The 3 Rules to Eliminating Price Objections.

With the official announcement that NBC is killing the Jay Leno in prime time “experiment,” I’m...

Today I want to talk to you about a topic that's crucially important to your customer acquisition,...

I’m in the midst of reading an excellent book at strategy. Good Strategy/Bad Strategy: The...