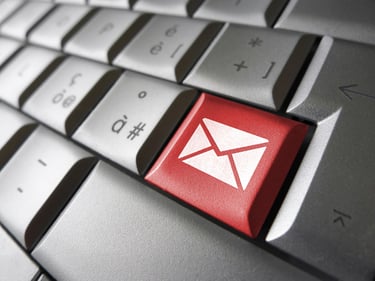 A common question I get from prospects is whether outbound sales efforts really work today. They talk about the noise in the market, the number of calls they get and how overloaded their email boxes already are.

My response is, “Crappy outbound doesn’t work anymore, but well-designed efforts work as well or better than they ever have.” A recent outbound effort where I was the recipient provides me a great opportunity to show why outbound efforts fail, and more importantly what you can do about it.Three weeks ago I received the following email (I’m eliminating all identifying information):

This is a typical first email that I see from many organizations implementing outbound lead generation. Let’s identify what’s wrong with this email:

Six days later, I got this email:

So, what’s wrong with this email? Everything from my list above. Once again there is no value whatsoever in this email. I’ve learned nothing about my situation, nothing about what the company brings to the table, and nothing that would indicate spending any time with this person would help me in any way. 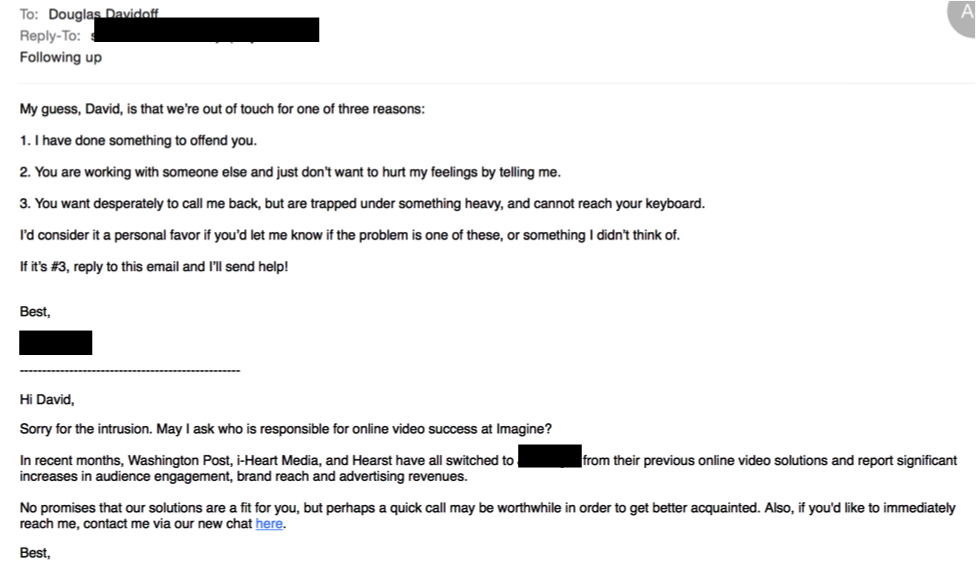 Seriously? Three emails over a two-week period and I get this email? Look, I’m a fan of the break-up email. It’s one of the most effective emails we use, and yes, we often use humor in the email.

But, two weeks and three emails? The data shows that it takes 8 – 12 attempts on average to connect with someone and they’re giving me the “I guess we’re out of touch for three reasons”?

While they continue to make the same mistakes from the first two emails, let’s highlight some of the new ones they’ve made:

You might be saying that I’m being picky with my comments, and that would be a fair characterization. However, when you’re designing outbound lead generation programs the little things matter… A LOT!!

Think about it this way. If a company is currently succeeding 5% of the time with their emails (and these types of campaigns probably aren’t), for every one-point improvement you increase the yield by 20%. With the tweaks that I share below, we’ve been able to increase quality lead populations by more than 100%.

If this company were talking to me about how to improve the results of their efforts, here’s what I would tell them.

The first thing that is clear with most outbound emails I get is that they have no idea who they want to communicate with. This is why so much of the content created is vague and boring. By taking the time to create clear personas you can create emails that have a much better chance to connect, influence and create the action you desire.

Value creation is binary – you’re either creating it or you’re extracting it. The emails I shared above extracted value. Craft your emails to educate your prospect on a problem or how you solve it. This doesn’t mean you should make your emails long, but you need to communicate why and how an action taken by the prospect will benefit them (even if they never buy from you).

3.  Pay (a lot) of attention to the list you create and use

We make mistakes with lists, as does every other organization on the planet that does successful outbound lead generation. However, we spend hours (and more money than I care to admit) on improving data quality and cleaning lists. This step is absolutely critical to a successful campaign, and it’s often skipped to save time or money.

4.  Design emails that are personalized and have more than one way to advance the process

When your prospect receives your email, they should feel like it was written for them. You should also provide at least one other way to advance the process. For example, a PS sharing a white paper on what creates effective video engagement would have been very interesting and I may have clicked on that.

A lot of prospects aren’t ready to put themselves (or a peer) in front of a salesperson. They may want to learn more about you or the issue you solve to make them more comfortable. Let them do that.

5.  Implement a rhythm that integrates email, phone and (ideally) social

Occasionally, a highly effective email will create enough of a positive response that you’ll be able to meet your goals simply by working the positive responses. However, that happens far less frequently today than it did even a couple of years ago.

Research from TOPO highlights the importance and value of multiple modes of contact. The only reason to not integrate phone into your campaigns is because you can cover far more people without it. However, in the vast majority of cases, you’re far better off reducing the number of contacts you reach while integrating phone calls.

Making this work requires that you have valuable content. If your outbound calls are only about setting appointments then all you’re doing is smiling and dialing. With valuable content, your outreach can be focused on helping, rather than closing.

6.  Lengthen the time and touch points

The length of time and the number of touch points used is highly dependent on the industry you’re in, what you’re selling and who you’re selling to. As a rule though, more tends to be better; and most companies don’t do enough.

We put a prospect through a campaign that runs 6 – 12 weeks and involves 12 – 20 touches (combining email, phone and voice mail). In highly directed campaigns, we’ll also include social connections as a means to increase conversions.

Implementing successful outbound lead generation campaigns isn’t easy. It requires a lot of work and attention to detail. The upside is that it can increase your qualified lead population by as much as 1,000%; so it’s well worth putting out the extra effort to do it right.

Stop for a moment and consider everything you do to win clients. If you’re like most people that I...

When I first began my career as a sales professional, everything to do with outbound sales calls...

5 Ways to Get Your B2B Blog Back on Track