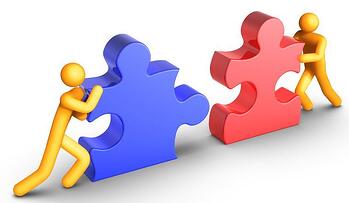 I was talking with the VP sales with a prospect recently, asking how they managed their funnel. His answer struck me as I realized that his thought process is both very common, and a core reason for the lack of alignment between sales and marketing, as well as a major barrier to creating predictable, sustainable and scalable sales growth.

His response to me was, “It depends which funnel you’re talking about.”  He then went on to explain how they viewed their “marketing” funnel and their “sales” funnel.

“NO!!” I thought. That’s the problem. You can’t have two funnels. To create predictable sales growth you must fully integrate and align your marketing and sales functions to create one seamless, holistic process.

Unmanaged, there is a major chasm between the marketing and sales functions. This is especially true when dealing with the complex sale that is typically associated with B2B sales.

The fundamental problem is that marketing tends to end their job too early and sales picks up things too late.  The crucial link between what most people think of as marketing and sales is missing, and the only way to ensure that it’s not missing for you is to unify the funnel.

Too often marketing thinks of leads (if they think of leads) as people who have demonstrated an interest in something the company is doing.  If the process isn’t closely managed by an effective service level agreement, marketing doesn’t see much of a difference between a lead who is expressing an interest in making a purchase decision in the next 30 days, and one who downloads a white paper.  They both get passed to sales as “leads.”

Salespeople, on the other hand, tend to view leads through the singular prism of what I like to call “order-ready leads.”  In their world the only good lead is one who has the PO number ready when the salesperson makes their initial call.

This disconnect creates a lot of friction and makes it impossible to build a scalable sales growth machine. Consider (source: Gleastner Research):

If your sales and marketing processes aren’t fully aligned and integrated, you’ll miss the highest value opportunities out there – those that haven’t already decided what they want.

A study done by The Aberdeen Group found that companies that had highly aligned sales and marketing organizations achieved, on average, a 32% year-over-year revenue growth; while their less aligned competitors saw a 7% decrease in revenue. 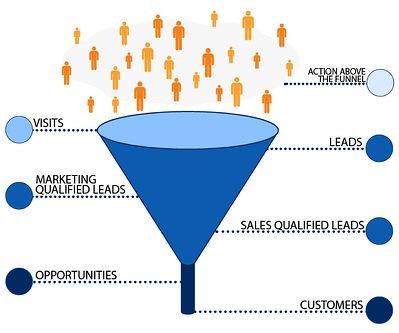 Creating a single funnel isn’t complicated.  There are only four parts to the funnel:

Above the Funnel: Includes everything you do to create awareness for your company and products and to drive visitors to your website.  With some small exceptions, Above the Funnel should be “owned” by your marketing team.
Top of the Funnel (TOFU):  Once you’ve created some awareness, the focus turns to making it stick, creating alignment and turning visitors into leads.   TOFU should also be owned by marketing, but your sales team needs to be involved in the strategy to ensure that it aligns with the bottom of the funnel and to provide the intelligence to build effective conversation paths.
Middle of the Funnel (MOFU):  Now that you’ve got people listening, the hard work begins.  It’s critical that you have conversion paths in place that turn leads into Marketing Qualified Leads (MQL) and MQLs to Sales Qualified Leads (SQL). MOFU can be a little more complicated as both the sales and marketing functions have ownership of this process. It is critical that you align what you’re doing on the sales side with what you’re doing at the top of the middle of the funnel.
Bottom of the Funnel (BOFU):  SQLs need to be managed in order to be converted to opportunities and then to customers. BOFU is owned by your sales function and should be supported by the content your marketing team is creating. If you’re marketing efforts aren’t directly increasing closing rates, it’s a pretty good bet you don’t have an effective marketing function.

By combining an effective strategy with a clearly defined process you’ll gain the leverage you need to build the sales momentum needed to accelerate growth, and to make the process of growing easier and easier.

Businesses must change their focus. The sales force must create value. Salespeople can no longer...

B2B sales is a tough game. Always has been; always will be. With the increased reliance on...

How To Design Your B2B Prospecting Approach to Achieve Consistent, High Value Results

A couple of weeks ago, I was asked a question in a forum I participate in about how we build our...