Has the Time Come to Ungate Your Best Content?

As the the great marketing strategist, William Shakespeare, said, “To gate or ungate your best content; that is the question?”

Over the last three years, there's been a growing roar questioning the wisdom behind one of today’s central practices for lead generation. An ever-increasing group of marketing and lead generation leaders are recommending that companies stop putting valuable content behind registration gates.

Drift, a martech provider focused on chat applications, and founded by former HubSpot Chief Product Officer David Cancel, was the first to call out the wisdom surrounding forms with the launch of the “No Forms” marketing campaign and positioning. Over the last year, HubSpot itself has questioned the use of forms as they’ve started talking about the use of “pillar content” and the impact it has on reach and search engine optimization (SEO). Over the last several months, more and more companies have “jumped on the bandwagon.”

The debate around forms vs. no forms is reminiscent of the Mac vs. PC debates of a decade ago, whereby otherwise intelligent and reasonable people seem to lose all rationale balance to advocate their position. Over the last six months, the call to eliminate forms continues to move more into the mainstream, and I see more sales & marketing advisors capitulating on the topic with little to no data to back up their conclusions. One prospect summed up where we find ourselves today when he asked me, “Doug, I haven’t even started using gated content and now I feel like I need to change before I start.”

Don’t get me wrong, it’s an important and valid question; one that should be at the top of the decision tree for any company executing a lead generation, inbound or content marketing program.

A Quick Summary of the Case for & Against Gating Content 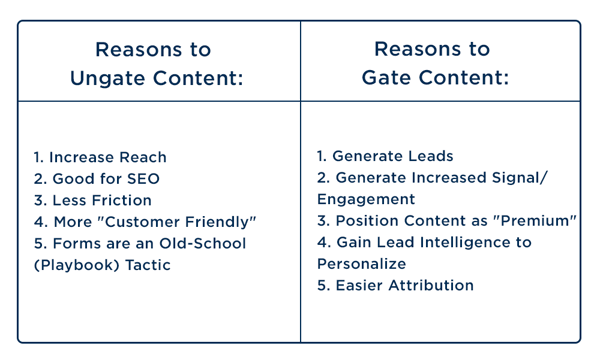 Increase Reach. The first argument against gating is pretty simple. Content is vital to building a business case, developing relationships and winning in the Zero Moment of Truth (ZMOT). When you put your best content behind a gate, you are by definition, limiting who can have access to it. Buyers have more choices than ever and if you want to win more business at lower costs and higher margins, you need to make it easy for people to access your best thinking and insights.

It’s Good for SEO. HubSpot’s research into pillar content makes the case that long-form content (the type of content that is often gated behind forms) is extremely valuable for generating organic search traffic. Further, they posit that the leads that are lost because people can access great content without registering is more than made up by the traffic and engagement that such material generates, which can be “caught” by other conversion tactics.

More Customer Friendly. Forms, friction and waiting create a negative user experience. There’s a feeling that if you gate your content, you’re withholding rather than sharing. Additionally, in a day when there is so much content, (and so much of it is crap) there’s risk that if a lead fills out a form providing a salesperson with their information, they’re going to be bombarded with emails and calls...and they may not even get content that’s worth anything.

Forms are Old School. Forms are a vestige of a day gone by. They’re born in the period where marketers and salespeople manipulated prospects so they could sell them. Plus, forms are ineffective and inefficient if someone wants to buy something from you. Why make them go through some arcane process, just let them talk to someone and buy?

The Case for Forms

They Generate Leads. Forms are the simplest way to turn your website into a source for lead generation. A lot of research shows that the more forms (landing pages with offers) you have on a site, the more leads you’ll generate. Reducing forms is counterintuitive and eliminating seems downright crazy to many.

Generate Stronger Lead Signals. Visits are nice, clicks are wonderful, but show me what someone spends the time to share information about, and I’ll know a lot about what’s important to them. While lead generation gets all the buzz, reconversion on forms can often be equally or more valuable.

Position Content as “Premium.” I remember in the days before the Internet, a common technique used to generate leads and engagement was to create a report and put a price on the report. Salespeople would then offer it to prospects for free. The purpose of the price was to position the content as premium. Gating content can do the same thing.

Gain Additional Lead Intelligence: With progressive profiling, every time someone fills out a form, marketers and salespeople gain greater and deeper insights to contextualize and personalize their approaches.

Easier Attribution: The nature of the conversion event a form-fill creates makes it much easier to measure and attribute content that leads to outcomes.

To Gate or Not to Gate?

As I sit here writing this post, it’s easy to understand why there’s so much passion and conviction on both sides of the debate, as both arguments are quite compelling. Before sharing my thoughts, let me share some of the data that underpins much of the “don’t gate” camp. 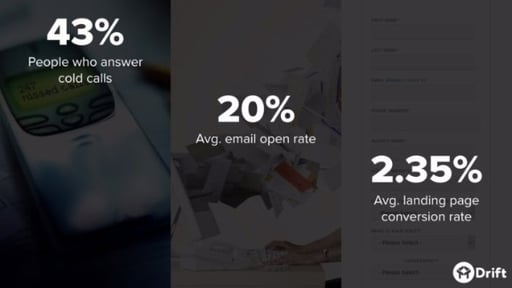 When you look at this data, it becomes pretty clear that the old form of marketing is dying and you’d better make changes fast...or does it. I’m not going to pick apart the data on this graphic, but suffice it to say that each data point here has some significant flaws and you should be careful about drawing conclusions.

The primary flaw with this data is that it’s all based on averages and averages are pretty useless stats. Why? Because poor performance and average performance overly influence the average. In 2018 if you’re implementing any strategy in an average or below average manner, you’re results are going to suck!

Here’s some firsthand data on the effectiveness of a strong email strategy. As for the usefulness of landing pages, I took a snapshot of the performance of Imagine’s combined landing pages over the last quarter:

Now, I don’t know about you, but I’m pretty damn happy with these results.

The reason that both arguments are so compelling is that both camps are 100% on-point. You absolutely should implement an ungating strategy through the use of long-form pillar content, chat and other “conversational marketing” strategies. You should also absolutely use forms for compelling content as well.

If I could change just one thing about today’s world in business strategy it would be to abandon “either/or thinking” and to adopt “and thinking.” The beautiful thing about pillar content, chat and landing pages with forms is that they’re complimentary. A strong approach for each tactic makes the others even better.

There should be one dominant thought when putting together your demand generation and demand capture strategy:

What Action are We Solving for?

Then ask that question for every page on your website. You’ll find that, unless you’re only solving for one action, you’ll use a plethora of approaches and tactics.

The Key Ingredients for Success

Today, you need to be careful about the advice, insights and best practices you follow. You must ask, who’s giving the advice and what’s their agenda? This is not, in any way, meant to indicate that any of the advice you’re getting is bad, wrong or inappropriate. It means that different companies are playing different games, the best chance you have to achieve your objectives is to play your game (not someone else’s).

Regardless of the strategies, tactics or approaches you take, you’re going to find that there are three key elements that are absolutely, positively required to have any chance of success:

Anything less than that today is a recipe for mediocrity and failure.

The good old pipeline review. There is probably no discipline embedded in sales management that has...

It’s spring in Wisconsin…I think. For those of you who don’t live here or really anywhere in the...