Last Friday was HubSpot’s 10th birthday, which means it was also the roughly 10th birthday for the concept of Inbound Marketing. It’s hard to believe that the term is only 10 years old. It got me thinking, what else didn’t exist 10 years ago? Here’s the initial list I came up with:

The bottom line is that a LOT has changed. The last 10 years have seen a virtual revolution in the “business growth game.” The biggest challenge for all growth-oriented businesses today is that the “rules” for this new game are still being written and are in a great degree of flux.

As Nobel Prize winning mathematician John Nash observed, the players that understand and master the rules of the game they are playing have a significant advantage over the other players. 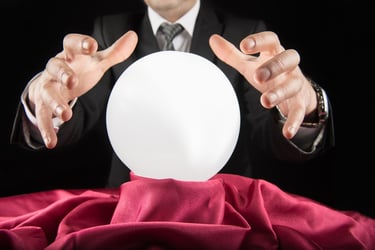 In that spirit, and on the occasion of HubSpot’s 10th birthday, I share my view into the future. Here are what I believe will be the five most important rules, five years from now* (I don’t have the guts or the imagination to try to go out 10 years):

1. Attention will be scarcer and even more valuable

Attention is already a high value “currency,” and the companies that effectively earn their market’s attention and keep it, have an advantage. The problem is that as more and more organizations are competing for that attention (and getting better at it), the attention that is available continues to diminish.

This means that to maintain an advantage, companies must be able to dig even deeper into understanding the hearts and minds of the customers they want to do business with. Today it is often enough to keep someone’s attention by sharing knowledge about things they already know. In five years, that won’t even be table stakes. Siri, Alexa and other forms of Artificial Intelligence will have that covered. In five years, you must be teaching concepts your customers don’t know to ask for.

Additionally, the tactics used to get attention will change significantly. I don’t know (yet) what those changes will be (though I do know I lose a lot of sleep thinking about it). As I shared in a post a couple of weeks ago, HubSpot CEO Brian Halligan and I debated on what the role and value of the phone will be. I’m not ready to say it’s going away, but I do know that it will be different. The company that stays on top of this will have a winning advantage, while the one that doesn’t will lose.

2. Products and services will be even more commoditized, making empathy the biggest competitive advantage

I don’t care what you do, but today (and certainly five years from now) there’s always an alternative. While the world is getting better and faster at creating new solutions (proprietary algorithm anybody?), new problems aren’t being “invented” at the same rate.

Whenever there’s an alternative, the solution is a commodity. When you add the noise and complexity associated with the world today, that means the rate of commoditization will accelerate. For companies that don’t adjust that means higher costs, slower growth, lower profits and, maybe, even extinction.

What’s the solution to this problem? Stop trying to differentiate yourself by mastering your solution, and instead know your customer better than anyone else in the world (including your customer). HubSpot is winning, not because they invented a better product - the reality was their original product wasn’t even that good (that’s totally different today, their product is great).

HubSpot won because they understand their customer and served that need better than anyone else. Today that’s a strategy for unusual success. Five years from now, it won’t be such an outlier.

3. The Third Discipline will match the importance of both the sales and marketing disciplines

I admit it. This one may be a bit self serving. But, just because it’s self serving doesn’t mean that it’s not true. The reality is that there’s a chasm between where marketing’s job ends and sales’ job begins. Increasingly, what’s required to bridge the chasm requires skills and a mindset different than than either marketing or sales possesses.

This third discipline, let’s call it Demand Generation, is wholly focused on what is required to transform awareness into defined sales opportunities. The companies that master this discipline gain a growth asset that will accelerate both revenue velocity and efficiency...and that means more revenue, lower costs and greater profits and enterprise value.

4. Millennials will take over crucial decision making roles in businesses

I guess this is another term that didn’t really exist 10 years ago. Over the next five, millennials will increasingly become decision makers and important influencers in business. And, if you’re over the age of 40, you probably already know that the way millennials learn and decide makes very little sense viewed through a traditional prism.

But think about it...Uber, AirBnB, Slack and many other very popular products and services that couldn’t have even been conceived of before owe their success to the new way millennials behave. To date, the impact hasn’t been that big on the B2B side, but rest assured that’s going to change quickly.

If you’re in marketing, demand generation or sales and you plan to still be around in 2021, you’d better start familiarizing yourself with how millennials think and act.

5. While everything will appear to be different, the same two elements that have controlled business success since the beginning of time will continue to do so

I think what I love about business, and especially this time in business, is that as much as things have changed, (to quote Led Zeppelin) the song remains the same. Success comes to those companies who match relevant content with effective distribution (note: in this case content is much bigger than words and websites).

Relevant content requires good strategy, and effective distribution requires good process. Going forward both the threshold of the definition of good, and the consequences of not meeting that threshold are dramatically increasing.

So, take this moment to celebrate the progress we’ve made, and get ready (and get clear) for the stakes to rise.

*I could be wrong.

The 7 Questions to Answer to Be Ready for Next Year

Year-end strategies for a successful 2014 As Thanksgiving approaches and a holiday mindset kicks...

The Changing Role of Salespeople:  What You Should Do Now

I’ve written often about the changing nature of sales in the B2B world. As selling has gained more...

Another year…another Inbound--the largest marketing conference in the world. As the conference was...