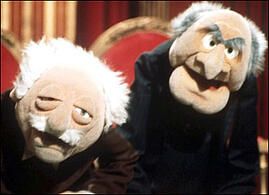 I always strive to practice what I preach. If I write about it or recommend it, I always ask myself, “Am I doing this?” If the answer isn’t “yes,” I don’t write about it.

With that said, today’s topic is one that I admittedly struggle with. I admit, like most people or at least most highly competitive people, I fall into the “if you’re not with me, you’re against me” trap. And I’ve experienced what every other person who puts their ideas into the world experiences – simply that some people don’t like what you are doing.

Last week, when talking about blogging to the Baltimore Chapter of  the American Marketing Association, I was asked about the fear of people saying negative things on a blog (a common fear) and my immediate response was, “the only thing worse than people saying bad things about you is people not saying anything about you.” I firmly believe this too.

I was talking with a client and friend of mine last week about going to the extremes and making a big, polarizing promise. He was, of course, concerned about what the response would be. I gave him the following advice:

Once you start, you can’t let your detractors scare you. You must embrace them. The detractors (or haters as my son calls them) come out first. It’s always easier to tell people what’s wrong with something or why you don’t like something.


You must know that the fans are out there, but in the beginning, they’re quiet and they stand back. They’re hoping you’re for real. They’re hoping you stand up to your critics. If you stick with it, they will begin to believe in you and that will make it feel safe enough to come out and embrace you. Once that happens, that’s when everything takes off. Most people don’t have the guts, discipline, or fortitude to do it – I think you do.


Don’t get me wrong. By embrace, I don’t mean that you cater to them. I mean you engage them. You should listen (often times they have very good points that can enhance what you are doing) and engage, don’t hide and don’t back track. Also, when you actually engage with a detractor, you’ll be surprised just how fast many of them turn into your first evangelists.
Inbound Marketing, B2B Sales Strategy

I understand the temptation to lie.   If you're a small company, you want people to think your...

I don't typically get jealous of people.  We all have our own stories, but I have to admit I'm...