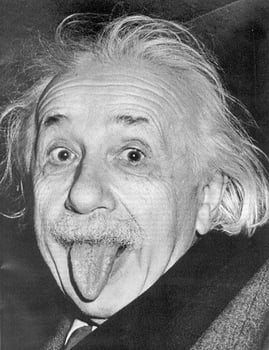 Okay, I think the world is beginning to take itself too seriously.  It's time to relax, let up, turn off the TV, play, and have some fun.  If you're not feeling the type of forward momentum you would like, here's an idea that will get it started: do something dramatically different.  Change it up.

I've been on a couple of calls with clients and prospects discussing how to charge their pipelines.  The most frequent complaint for an idea - "Well, we've never really done that here."  Right - that's the point.

The second more frequent complaint - "How do we know that will work in this environment?"  We don't know, but we do know that what you're doing isn't working.

Not to sound off a rant, but I feel as though we need to be reminded of three critical quotes (the first two from Albert Einstein, the last from Thomas Edison):


What's the point?  Stop thinking, moaning, or analyzing.  Get out there and do something fun, exciting - and different!  Who knows, even if it doesn't work, you may just get the breakthrough you were looking for.
Performance, B2B Sales Strategy

As I was watching the US women win their opening game of the 2012 Olympics, I found myself thinking...

The 3 Rules to Eliminating Price Objections

Yesterday I shared that price and the vast majority of objections that surround price are merely an...

Anyone who knows me knows that I love coaching my son's baseball team.  Fall season started...