How Being Wrong Frees You For Top Performance 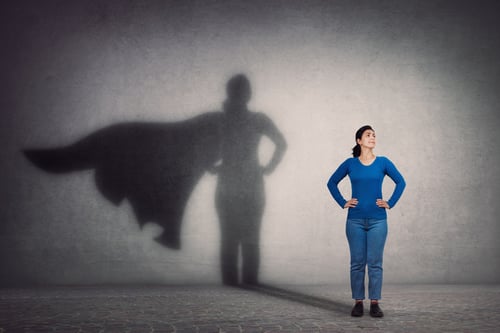 “You are going to be wrong more often than you are going to be right.” As intimidating as that may sound, it’s the truth. Those words were spoken to me just over a year ago by my boss (yep, you guessed it, Doug) during my interview to join the Imagine team. As someone who is terrified of being wrong, this sentence changed my life, and I bet it can change yours, too.

Everyone has at least one fear, if not many fears. Some fears might be natural, but most are developed throughout our lives as we grow up. We are taught to fear certain things on purpose to protect ourselves, but there are other fears that we are taught without even realizing that they are being ingrained into our minds. Being wrong is one of those fears.

I Was Raised to be Right

Growing up, I came from a family that emphasized the importance of doing well in school and being the best version of myself. I’m sure every parent wants their child or children to excel in everything they do, but there’s always going to be a different level of expectation. The expectation for me was that I was getting As in school and being a top performer in my class. It’s a good thing I really enjoyed learning and going to school because otherwise those expectations probably would never have been met. Those expectations were also very strict. If I didn’t perform well, it was like the end of the world having to explain why I didn’t do well to my parents. I feared the consequences of underperforming because it was seen as wrong. Granted, my parents are loving. They just wanted the best for me and for me to learn that school was important. Because of that, I’m where I am today, but that fear was developed from a young age. The thought process looks a little something like this -- bad grades are the result of being wrong and being wrong is bad.

That fear continued to be developed throughout school. An answer was either right or wrong. There was no “It depends.” (Unless you’re in an economics course, then everything could have that answer.) On a test, your answer was right or wrong. Your essay was either totally right, kind of right, or wrong. Even having an opinion could be considered right or wrong depending on the topic at hand. There was no escaping the thought of being wrong, and with the expectations that my parents had for me lingering in the back of my mind, being wrong was something I just could never be. This is partly why in class I never spoke up unless asked to or 1000% felt like I had the right answer; the fear of being wrong and being embarrassed in front of others was overwhelming.

Even in college, the fear of being wrong stuck. I didn’t ever want to be wrong in front of my classmates. I’d look dumb! I was considered smart amongst my friends. I couldn’t show them otherwise. I know that sounds very overdramatic, but those are the thoughts that would go through my head. Yet, I wish I hadn’t cared about being wrong because I would have learned WAY more and would have taken those learnings with me into the real world. But it’s okay because I’ve been breaking down that fear for the past year. It hasn’t been fun, or easy, but it’s proven to be worth it time and time again.

How I Learned That Being Wrong Can Be Right

At the end of my college career, I was offered the position I’m currently in and from day one I was told the opening line to this post, “You are going to be wrong more often than you are going to be right.” Following that statement, I was told that it was a good thing to be wrong. For someone who has a fear of being wrong, this boggled my mind. How could you be wrong and it not be the end of the world? As much as that statement shocked me and scared me, there was something about it that calmed me. I knew I was heading in the right direction with this position.

Since that day, I have been put on the spot, have been asked questions I don’t have the answers to, and have been told numerous times to try again. Those conversations are by no means fun, but I’ve walked away from every single one of them with something new to think about and with a different mentality. It is because of those conversations that I have been able to put my fears out in front of me and tackle them head on. I learned that being wrong can be right not just by the words of those who work alongside of me, but by the situations I’ve been put in that have shown me the benefits of being wrong. Almost a year later I can say I’ve learned just how much being wrong frees your mind, and how much it can impact your performance.

I am now able to put out an idea, a take, an opinion without much hesitation. I say “without much” because I’m still breaking down this fear. It’s a lot of hard work to face your fears head-on and transform them into good concepts. It has taken time, patience, and putting myself in the position to tackle the fear to make the progress to where I am now. I still have to work on it and bring myself outside of my comfort zone, but the feeling and the learning I’ve gained from doing so has made every frustrating, uncomfortable moment worth it.

5 Ways Being Wrong Frees You For Top Performance

1. You change norms. By this I mean that you have the ability to change how things have normally been done for years. Being wrong allows you to look at things from a new or different perspective and can open up your mind to new information in order to perform better. Knowing that something doesn’t work allows your mind to think of other possibilities of how to achieve what you’re working on. You’re only generating more room for improvement and success by being open to being wrong because you learn every time you make a mistake, and you learn deeper.

2. You better align with everyone you work with. There have been days where I’ve thought I was on the right track with working on a task. In reality I was actually working on something completely different than what I was asked to do because I was afraid that how I interpreted something was wrong. By asking for clarity and sharing that you might have misinterpreted something will ensure you are working on the correct task and can free yourself from spending time on something that may not truly matter.

3. You learn to bounce back. Knowing that you can get back up and work harder after you fall is crucial to success. Getting back up means that you learned something and can move forward with greater knowledge than you had before. If all you ever looked for was the right answer and found it, you could have found it based on pure luck. At least with finding the wrong answer, you now are one step closer to finding the right one.

4. You learn to speak freely and share. You no longer feel the need to search for the right answer when someone asks you a question. Instead, you’re able to share your thoughts and perspectives to elicit a conversation. Any and every idea you have could be a success or a winner, but you won’t know until you throw it out there or until you try it out. Holding those ideas in because you think they are wrong/bad could be keeping you from discovering something that does wonders for your position or for the company.

5. You get better every day. The more you are wrong and are comfortable with being wrong, the more opportunities you have to improve yourself. It takes effort and time to turn a fear into something useful, but every step leads you on a path to greater success and performance. It’s like the song from Santa Claus Is Comin’ To Town: “Put one foot in front of the other and soon you’ll be walking ‘cross the floor.” Every time you put yourself out there is another step forward to reaching your goals.

Being wrong isn’t something that is going to set you back. If anything, it only does the opposite. It pushes you forward and allows you to grow and learn along the way, whether it’s individually, with your co-workers or as a whole company. Just today, I was wrong about an idea that was discussed during a brainstorming session I had a few weeks ago. Even though it wasn’t my idea, I had agreed that it was a possibility worth looking into. Seeing that it was the wrong way to go about things allowed us in the meeting to hash out the rationale behind the idea and to see our thought process behind it. Doing so allowed us to move forward and explore why the idea wasn’t the best. I left that meeting with more knowledge, understanding, and clarity than I would have if that wrong idea was never brought to light or discussed.

I will say I am wrong more often than I am right, but now I celebrate both rather than hiding in fear at the thought of being wrong. And because I know how much being wrong is good for your growth, I’ve been able to look back at the times I was wrong growing up and can see where they’ve only helped me in the future. I still remember to this day all the times I was wrong in college. I can also remember how seeking out why I was wrong and what I could do to perform better the next time helped me more on the next exam than when I was right the first time just based on luck.

If you are like me and have a fear of being wrong or another fear that’s holding you back, battle that fear. Put it front and center in your life to change the way you view whatever it is that’s keeping you from your top performance. It’s because of the support of those around me that I’ve been able to go through the process of conquering my fear, and because of it, I’m better at what I do. If you asked me a year ago if being wrong was good, I would probably laugh and then get nervous because I didn’t know the right answer. Today, being wrong is one of the best things that has happened to me because I’m now free to become the best version of myself because I am knocking down my barriers. Being wrong has only led me to greater success, and if there’s something you should start today, it would be to let go of your fears and put yourself out there. The rewards are endless.

Today's favorite post is a joint choice and comes from our Demand Generator team of Dan Gerjets and...

So on Sunday, my son asked me to take him to a park that he hasn’t been to since he went there on a...

Why Small to Mid-Market Businesses Should Not A/B Test

Experiments, tests, and hypotheses all help a company continue to learn and grow with their product...