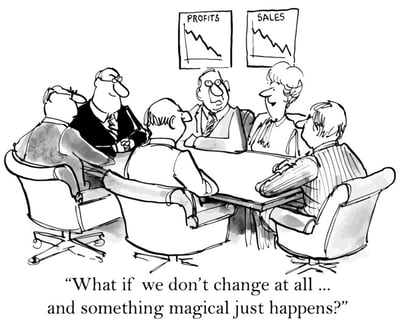 A new research report from SiriusDecisions presents a pretty damning view on the state of sales today. The 2018 Global Chief Sales Officer Study surveyed the heads of sales from 250 companies covering a broad array of business, from small business through large multinational businesses.

Here are some of the key findings:

I’ve got to tell you, I had to read the report twice before I believed what I was seeing. The last five years have seen greater investments in customer acquisition and sales than ever before, yet these numbers indicate that nothing has improved.

Of course, I really shouldn’t have been surprised to see these numbers as I’ve got front row seats to this whole thing. While I caution people to be wary in reading too much in surveys, this report is another piece in a growing plethora of evidence that shows that selling organizations have still not made the necessary adjustments in their approaches to sustain and succeed.

Time is running out. As noted strategist and author Clayton Christensen says, “In business, the new game starts before the old game ends.” The old game is in its twilight, and if you haven’t made meaningful changes to your go-to-market and sales approaches, you’d better do that soon or suffer from these problems (if you’re not already):

While we could write a book (I am - coming out soon) and talk for hours (I have) about why businesses are in the mess they’re in, there are three causes at the core that must be addressed or the study that comes out five years from now will look much worse:

Building A Strong Engine for Growth - The Missing Middle

In Imagine’s 15 years, I’ve heard one comment more than any other from growth executives seeking a solution to accelerating their growth. They say, “Doug, we’ve great when people understand what we do, but we need to take greater advantage of the opportunities/leads we’re creating who don’t ‘get it’ as quickly.”

Here are the scenarios that present themselves in a growth-focused company’s funnel:

The third scenario typically represents 50-85% of the leads and opportunities that are being generated. Winning this segment (at reasonable costs) requires an approach to the middle of the funnel.

If you’re looking to build a powerful engine, here are the 10 components we look at:

The middle of the funnel is fraught with complexity. There are tens to hundreds of scenarios that must be understood and planned for. A strong middle requires dynamic systems and process design. You wouldn’t build a skyscraper without a good blueprint; don’t treat your engine for growth any differently.

The amount of time that salespeople spend actually selling has been decreasing consistently since I started selling. One of the primary drivers of this problem is the amount of non-selling, administrative tasks that must be done to keep systems up-to-date and in compliance and to manage their days.

With strong systems and process design, you can automate the majority of non-value activities that salespeople must do. One of the primary reasons companies hire Imagine is to help them create strong playbooks. While we’re big proponents of playbooks, a playbook is only valuable when it’s integrated (and automated) into the working systems used by the sales team.

Larger databases are mixing with heightened demands for growth while markets get noisier and customers are getting pickier in allocating their attention and time. To survive, let alone thrive, you must develop a strong segmentation strategy that will enable you to personalize and contextualize your actions at scale. 1:1 marketing is no longer a dream or a soundbite, it’s a ticket to play for profits.

I’m going to go out a limb here and predict that your database is a mess. Demand generation strategies have multiplied the leads you’ve generated, but if your database isn’t designed correctly (and maintained), you quickly lose the value of the lead.

Companies are spending more money than ever before finding new ponds to fish in, when they’d often be better off learning to fish in their own database.

Strong content is absolutely crucial to build an effective middle of the funnel. Too many companies are asking their sales development reps and salespeople to drive higher volumes of output, with anemic messaging and content, then blaming them for failing to deliver.

I’m increasingly convinced that the fundamental cause of the sales problems of the last 50 years is because executives simply spend too much time thinking about what has to happen for a prospect to buy from them. In today’s customer-controlled market, the focus should be on what has to happen for prospects to be engaged. Engagement is the raw material for a sale, and it’s in the middle where engagement takes hold.

A strong outreach (whether you call it outbound or not) is another critical factor in building a powerful engine for growth.

If you talk to anyone who is an expert in athletic performance, they’ll tell you that it’s the middle of your body (what they call your core) that creates the vast majority of the power that is exhibited. It’s the middle that enables one to transfer power.

The same is true when for demand generation and customer acquisition. The middle is where the engine that powers growth is located. A world-class lead generation process, matched with killer sales team that doesn’t have a strong middle, will struggle.

Lead generation and sales process are dominated by vanity metrics. Vanity metrics thrive in these areas because they’re easy to measure, make people feel good and their ineffectiveness can be overcome by merely increasing the volume of activities or inputs.

The marketing function (at least as most business executives define it) has been undergoing...

Struggling With Content Marketing? Here Are 7 Ways to Make It Easier

Let’s not kid ourselves – creating relevant, compelling content is hard work. Many B2B blogs have...

New Data: B2B Sales Conversations Are Down. Here's What To Do About It

Data from The Bridge Group, a sales development consultancy, shows that sales conversations are...