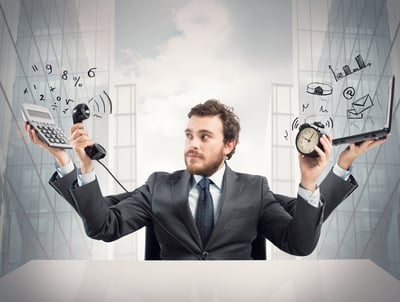 The Imagine team has invested quite a bit of time and energy into mastering the design, development and implementation of playbooks that guide all facets of the customer and revenue acquisition, and retention process. However, we understand that not every company (or executive) feels the "juice is worth the squeeze.” You and your company might be one of the few who don’t need to spend time developing and using a playbook. Do any of these qualities describe you?


Rehiring Salespeople (and Marketers) is Fun for You

The mis-hire rate for salespeople is astronomical and the mis-hire rate for marketers is growing. Playbooks bring help you define the qualities of the talent needed, create a repeatable hiring process, and build a “genius in the system.” This means you get:

But, hiring new sales and marketing people means you have an endless stream of new people to meet. We know some people who use the salespeople churn process to get dates. We don’t judge.

This might sound too predictable and safe for you, and you might be an adrenaline junkie that needs the endorphin rush from the craziness that business chaos brings.


Your Ego is Bigger than Your Desire for Success

Playbooks kick up sales and marketing success by:

There are those entrepreneurs and executives who’d rather satisfy their ego than have a successful team, hit their numbers or scale their company. When you don't have a playbook, it's far more likely that if you're successful, everyone will know who the genius is (of course, it's also far less likely you'll be successful).

I love it when people cheer for me too, but I’d rather live the boring life of predictable success.

In football, you can always tell who uses great playbooks—they're the ones who get better every week and dominate the second half of the game more than the first. The reason? The playbook helps them adjust and constantly improve quickly.

If you don’t like constant improvement (it can be too thrilling for some people), I read about a society that runs an annual contest to see who can run a company with the least amount of change every year. The winner gets an unopened CD of Windows 95.

Playbooks make success feel so effortless because they create alignment, both internally (within the selling organization) and externally with the client. The impact of alignment is clear: shorter sales cycles, higher closing rates and higher average sale values. If you don't have a playbook, you won't have alignment.


Micromanaging is a Core Part of Your Culture

Playbooks are crucial in enabling team members to understand their goals, to be autonomous and to perform their role effectively.

However, in some companies, micromanaging is a valuable time-killing activity for employees in middle management positions or, those unqualified people in jobs given to them by family members. Do not institute a playbook or these employees will become sad and confused.


Luck is Your Best Chance of Success

There’s this guy who started betting on horse races in 1955, became a millionaire overnight and had a lucky streak that earned him the name, “The Luckiest Man on Earth.” He started BiffCo, made tons of money and married his childhood sweetheart, Lorraine McFly. If you’re Biff Tannen, you can count on luck. But actually, even Biff Tannen had a playbook of sorts: the Sports Almanac given to him by his future self.

I used to have a business coach who told people that luck or hope was not a strategy. I disagree; luck and hope are indeed strategies, they're just not very good or reliable ones. The rest of us need help.


All Kidding Aside, Playbooks Are the Best Thing Since Sliced Bread

With almost 50% of salespeople failing to hit quota, and marketing organizations that still aren’t driving adequate qualified lead volume or demonstrating clear ROI, it’s clear that most approaches aren’t working. The number one reason I love playbooks is that they make achieving objectives predictable and purposeful. An effective playbook takes the mystery out of success and enables organizations to quickly identify barriers and gaps, and to make adjustments successfully.

So, unless one of these seven qualities apply to you, make developing or optimizing your playbooks a high priority.

It finally sank in on Madison Avenue in 2005 that the 30-second commercial is fading as a means of...

According to the Content Marketing Institute, in 2016, B2B organizations plan to produce 76% more...

Why Your Custom Integration Doesn't Work For You

We’re all aware of how companies’ go-to-market tech stacks have grown rapidly in terms of both size...