Sisyphus vs. The Flywheel: 5 Tips to Eliminate Friction 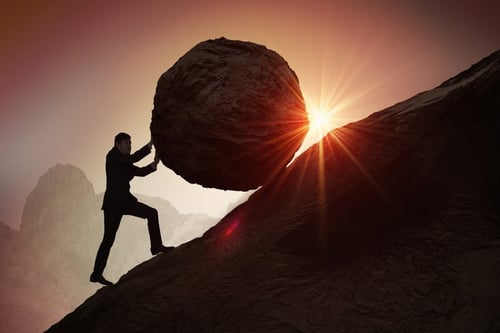 Last week I had the pleasure of spending a couple of days with a client’s sales leadership team, discussing the transformation they need to embark upon to become the business they want to be. One of the things that made it such a pleasure is that this group is already doing a great job. They’re hitting their numbers and growing in an industry that isn’t, but they also know that what they’re doing today (and more importantly, how they’re doing it) isn’t enough to get them where they need to go.

One of the things I noticed about my client, which is very common across growth-focused mid-market organizations, wasn’t how committed and passionate everybody was. (Don’t get me wrong, they were those things!) It was how tired they were. They were busting their backends doing everything they could to make things happen. Meeting in early January served as a bit of symbolism. It was the beginning of the year, so they were all “hitting the reset button” to bust at it again.

I see a lot of top performers who are tired these days. Some of my best sales friends, while winning club and hitting new performance records, often spend more time sharing how exhausted they are and how they are striving to spend more time with family rather than sharing the stories of success and the challenges they overcome (which dominated our conversations just a few years ago).

Certainly growing a business requires hard work, often very hard work. But, I’ve learned that there’s only so hard you can work, and at some point working harder not only doesn't contribute to success, it gets in the way of it. The story of Sisyphus is supposed to be a parable of warning, but increasingly it’s becoming a descriptor for leading a growth team.

Here’s how Les describes the fun stage: You’ve broken through the Early Struggle—you have cash (at least enough to take the pressure off) and an established market. It’s time to have Fun! Now you’re free to concentrate on getting your product or service into the market, so the key focus now moves from cash to sales. This is the time when the organization’s myths and legends are built, and the “Big Dogs” emerge—those loyal high producers who build the business exponentially in this time of rapid, first-stage growth.

Fun is followed by Whitewater: The very success that you reaped in the Fun stage brings with it the seeds of Whitewater: Your organization becomes complex, and the key emphasis shifts once more, from sales to profitability. Achieving sustained, profitable growth requires you to put in place consistent processes, policies, and systems. Unfortunately, putting those systems in place proves harder than you expected. Making the right decisions seems easy, but implementing decisions and making them stick is incredibly difficult. The organization seems to be going through an identity crisis, and you may even be doubting your leadership and management skills.

The Second Law of Thermodynamics is that entropy is always increasing. Entropy represents disorder and randomness. In simpler terms it means that a natural organizational dynamic is that disorder and randomness is always increasing. In your business this disorder means more friction. As a business grows (or simply survives), it picks up more complexity. That complexity creates friction, and before long, what seemed easy becomes difficult or impossible.

Friction is a part of growth. It should not be ignored. Frankly, whether you recognize friction or not, it will yield its sharp edge. The key to sustaining growth, and making growth manageable, predictable, and, yes even enjoyable, is to manage the friction. These tips are for those who are committed to managing friction to accelerate the momentum of their growth flywheel. 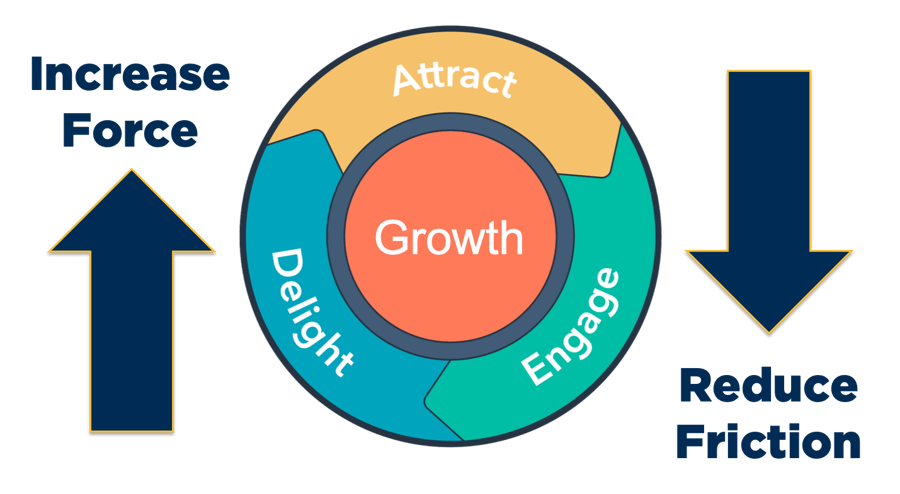 1. Understand the difference between complex and complicated

The friction created by business growth is a complex problem; you can’t just “solve it.” 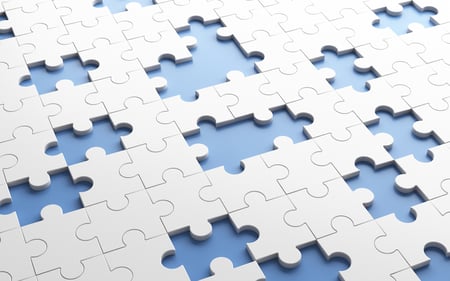 When you understand the difference between complex and complicated, you can understand what I like to call The Inverse Principle of Elegantly Designed Systems. The principle states that the ease/simplicity (lack of friction) of a user’s experience is inversely related to the complexity of the design of the system used to create it. Simple system = complex experience. A complex system, well designed = low-friction experience.

Here’s an example: have you ever bought something on Amazon or requested a ride on Uber’s app? It’s remarkably easy and frictionless. It’s so simple and so easy, that they’ve wrought havoc on customer expectations. Why, people wonder, isn’t everyone making everything this easy? The answer is that the complexity required to make those experiences so seamless is extraordinarily complicated and quite hard.

When a business starts, things are very simple. It’s so simple, in fact, that it can support (and even benefit from) complexity associated with execution. I know when I started most of my businesses, I was THE salesperson. That’s it.

The fun really started when I was able to hire the right people to manage other functions. It freed me from the stuff I wasn’t particularly good at, it improved the customer experience and I had some other people to enjoy the ride with.

But again, my world was really simple. The cost of the friction associated with people managing everything didn’t feel like all that much; after all, we were all sitting in the same room, so our client updates coincided with comments about the weekend’s games. 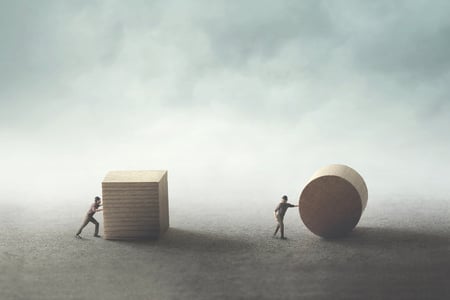 Then the database grew. We hired more people. Our selling proposition got more complicated. Everybody got really busy. Suddenly time became our scarcest resource, and no one had time to think. The problem was that our “system” was built on people constantly stopping, thinking, starting, stopping, thinking, restarting, and so on. That friction that was no big deal, became the death of a thousand mini-pauses.

Welcome to Whitewater. The genius of “great people” became a burden, not because the people weren’t great anymore, but because we were no longer synchronized. Constraint and bottlenecks ripped away our rhythm.

For sales organizations, once you get above 5 people, small elements of friction are magnified and create friction and drag. Salespeople spend less time selling and more time dealing with the consequences of selling, which creates a negative feedback loop.

Don’t lose hope. The process is manageable, and sustained growth lies on the other side of whitewater. But, the same thinking, rules, and approaches that are “money” in a behaviourally driven, small system are poison in a systems world. You must think and act differently.

Here’s the good news for sales and marketing organizations. This problem has been confronted and solved before. Just talk to your senior manufacturing peers. The ones that were around before terms like Reengineering, Six Sigma, and TQM were trite. The same counterintuitive thinking that made W. Edwards Deming a manufacturing savior in Japan and, later, the US works here.

Realize that systems produce the precise results they were designed to produce. So if you don’t like the outputs, if you’re working too hard, if you're spending too much, don’t focus on “bearing down and gutting it through,” take a look at the system. 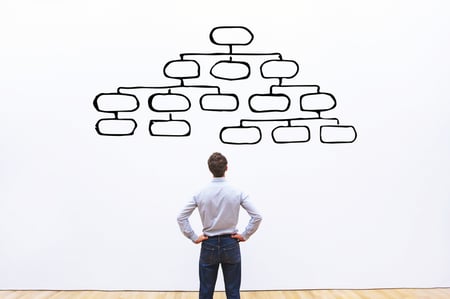 The first thing you should do is map your entire customer & revenue acquisition and retention process. Now, I’ve asked hundreds of companies to do this over the last few years, and no one, absolutely no one, gets excited when I suggest it. Quite the opposite, actually. They immediately come up with tens of reasons that it would be a waste of time. (It won’t be - trust me.)

When I get the push back, I can’t help but laugh on the inside. This should be an easy task. Ninety percent + of the companies that I talk with tell me they have a solid understanding of the marketing, sales and customer acquisition processes. They insist that it’s because they have a solid handle on this that the exercise is unnecessary. But, if they did, the exercise would be so easy that it would be worth resisting.

The exercise is hard precisely for the reason that it is so valuable. It forces you to think through the areas that create the type of friction that acts as a barnacle does to a boat.

Document your playbook. Realize that whether you’ve documented a playbook or not, you have a playbook. Your playbook is the modus operandi of your organization. The question you must answer is do you want that MO to be clear and purposeful or not? 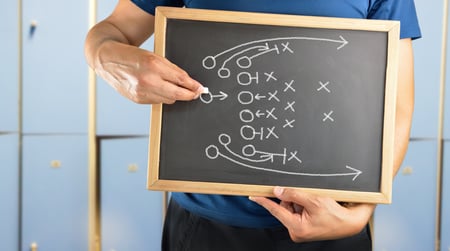 If you want to mitigate friction, there really isn’t a question to consider. You simply must document and continually optimize your processes for three reasons:

5. Give Revenue Operations A Seat At The Table

There are only two activities that can strengthen your flywheel momentum. They are to increase force or reduce friction. Increasing force (doing more) quickly hits points of diminishing returns. When the focus is on “more,” costs go up, as does the complexity. When you’re focused on force, the increased friction eliminates much of the value you seek to create.

Reducing friction enables the entire organization. It makes everything you do more efficient and usually more effective. It enables people to get more from the time and effort they put forth and it gives the organization more stability.

However, it’s unfair, if not impossible, to ask a person to focus on the “doing more part of the equation” and the “reduce friction part”, because it’s very difficult, if not impossible, to effectively focus on both at the same time. Force and Friction should create constructive tension and should be constantly seeking a balance. To do that, the time has come to give the focus on reducing friction a seat at the table. It’s time to not only create and enable the revenue operations role, but it’s also time to give it the strategic relevance it deserves.

As you and your organization move forward on your journey for greater growth, you’ve got a very simple decision to make. Prepare for the life of Sisyphus, or implement the tips above (and more) and start taking friction seriously.

I recently had a conversation about some marketing initiatives. As we were outlining our...

The Inspiration for Fast Growth

I work very hard to ensure that this blog focuses on the issues facing fast growth businesses.  To...

Do You Work As Hard as Drew Brees?

I admit it. I’m in the tank for Drew Brees and have been for a while. I think it started when he...