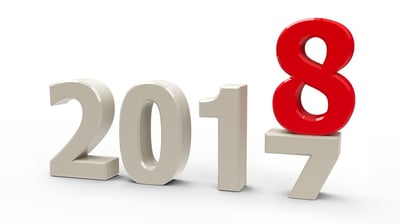 It’s that time of year again. All across the land, sales and marketing executives, as well as salespeople themselves, are scurrying to put their 2018 sales plan together (for those who operate on a non-calendar year, I realize you’ve already done this).

Plans are in development (with some even near completion) for the next 12 months.  Fueled by the euphoria of ending of a healthy year, the frustration from closing out a weak one or merely the optimism of what the new year and new plans can bring, companies are pulling everything together, with the goal of clarity, action and success.

I know this from being on more than a dozen calls with clients over the last three weeks helping them put these plans together. While the work is useful (as the saying goes, the value is in the planning - not the plan), I also get an empty feeling from all this work.

Rarely are these plans actionable or useful. While the revenue targets outlined may be hit, when they are, they’re achieved in ways that are, how shall I say, less than predictable. As with so many traditional business disciplines, the effectiveness of most annual planning should be questioned and adjusted.

With more than two decades under my belt studying the difference between sales plans that drive better decisions and actions, than those that don’t, I’ve discovered five key reasons that annual sales plans fail.

1. The Failure of Putting a Plan Together

Frankly, the only thing I’ve found that is worse than the typical annual sales plan is the failure to have one. Planning is a discipline. Done consistently, it creates great insights and capabilities for all involved. Don’t throw the baby out with the bath water. If you don’t find your planning process valuable, change the process; don’t drop the discipline.

What has a lot of words, typically some charts and is meaningless within 60 days? A sales plan.

I’m all for setting targets for the next year (and the year after that), but those targets should be viewed as waypoints. I was talking with a client about this last week. He told me that he needed to get some certainty around his projections so he could set his employee budget and determine if he was going to hire in Q418.

My response was, quite simply, any projection we make about the fourth quarter next year is irrelevant. There are so many variables that impact the issue that even thinking about those things wasn’t worth the time allotted. I told him we should start thinking about the hiring needs of Q4 at the end of Q2, at the earliest.

This is why I’m a big fan of 90-day cycles. When you’re developing “annual” sales plans every 90-days, three powerful outcomes emerge:

A common mistake made by entrepreneurs especially is treating planning like goal setting. They say things like, “We were up 20% last year, I don’t see any reason we can’t be up 25% this year,” or “Let’s set a stretch goal, after all, if you aim for the stars and miss, at least you’ll land on the moon.”

With the goal set, they charge their team to create the plan to hit those targets. While this can work for personal growth, it’s a horrible way to plan for your business.

I should point out that this approach can work when a business is small, but even in that case, it’s important not to violate the next two errors.

4. Using Your Gut or Desire Instead of Data

The most common question I ask when reviewing someone’s plan is “How was the target number set?” The most common answer I get boils down to either gut feel or desire (as shared above). One client’s plan was literally unachievable if you were to bring a data-backed approach to the plan. Additionally, my client learned that they were focused on the wrong areas to drive growth because of this mistake.

Your sales and marketing systems and dashboards are instrumental here.

At this point in the post, the majority of young, aggressive companies (typically SaaS and typically funded) are thinking, “We don’t make any of these mistakes. We take a disciplined approach to our plans, use data and adjust regularly. We build out a clear waterfall and attribute the actions and capacity to outcomes. We’ve got this covered.”

Until this fifth reason comes to bear. I’ve discovered that the single biggest and most common reason that sales plans don’t drive predictable results is that companies aren’t using realistic assumptions in determining what they need to invest to drive growth.

I like to tell people when they’re planning for growth they are, in essence, building their own money-making machine. Before you can take money out of a machine, you have to first put some money in. Figuring out what that number is, is crucial to scaling growth.

Planning doesn’t have to be such a ritual waste of brain power and effort. Over the last decade, we’ve worked with thousands of growth companies and studied the approaches used by the very best companies. We’ve combined these insights into a planning process that creates clarity and alignment and turns planning into a valuable strategic approach that drives results.

At Imagine, we've used this process internally and have seen firsthand, the power of reality-based, data-backed planning. On December 12th at 2pm ET, for the first time, we are going to share the precise process we use to create actionable annual plans. This program is not about theory, it's all about action! Warning: Math will be highlighted in this process, so do not attend if math scares you.

If creating sustainable predictable growth is important, you won’t want to miss this webinar.

Aaah, November. A time where the temperature gets cooler, the football games get more serious and...

The 3 Questions Every Sales Plan Needs to Answer

When I first started running sales teams I hated the idea of annual sales plans. I found them to be...

A User's Guide To Planning A Successful Webinar

While we had all hoped the dawn of 2021 would usher in our return to social activities, parties and...