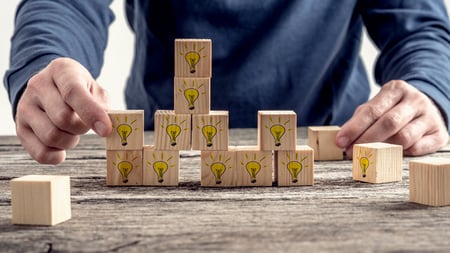 Experimenting and testing is important. We need to be better at it. You may think testing is a waste of time, especially if your hypothesis is proven wrong, but let me tell you, you’ll waste even more time if you only play the guessing game of what works and doesn’t work.

Think about it -- marketing is a combination of art and science, mixed together with a dash of luck. We see the art side of marketing everywhere: copywriting, website updates, social posts, and more. The science side, however, isn’t nearly as easy to spot, despite how important it is to making the art side work.

We need to get comfortable with putting together experiments and making sure we’re doing them for the right reasons. Let’s be clear, we’re not designing laboratory experiments to be peer-reviewed in academic journals, we’re trying to influence behavior in the real world. Therefore, our approaches should be aligned with this effort. Don’t get hung up on the thought that experimentation means coming up with a world changing test, because testing in general, done right, will give you just as impactful results.

How to Create a Successful Experiment

Before you even think about testing, you’ll want to make sure you have a hypothesis to test. Without the hypothesis, there is no foundation, therefore no experiment can take place.

If you’re wanting to learn more about creating a strong hypothesis, and why hypotheses are important, our CEO, Doug Davidoff, does a fantastic job of explaining it all. I would highly recommend taking time to read that post because you’ll want to know and understand the hypothesis as much as possible going into an experiment.

1. Knowing the Technicalities - There are parts of an experiment that you should know and remember to take into consideration as you put together your test. You might remember these from all the science fair projects your teachers had you put together over the years:

2. Set up a Poor Experiment - You'll need to set up lots of experiments, and poor ones, to create a successful experiment.

The hypothesis wasn’t the best and neither was the way we set up the experiment. We didn’t grab a decent pool of people to test, we didn’t have a constant, and we did everything very selfishly, choosing only those people who we thought would definitely join the network. Rather, we should have set up some constants, pulled together some sort of control group, had a larger and more diverse pool of people, and had more of a plan in place to really test the hypothesis.

Granted, we did find out some interesting information from running this poor test which will lead us into testing this again with different restraints and a better plan of action. We wouldn’t have got to this point, though, if we had not run a crappy test.

It’s never a fun experience when you realize afterwards that the experiment that you did was created poorly. That’s the whole point of testing though. You have to start somewhere. It’s not easy by any means and takes some time to put together, but practicing and putting hypotheses to the test will be worth the success you’ll have.

3. Keep learning, iterating, and trying again - Just because you’ve tested something once does not mean that you should stop there with the answer. It doesn’t stop after one experiment. It’s a cycle that never ends. There’s no point in running an experiment if you’re doing a one and done type of thing because there will always be something else you can test.

The last thing to keep in mind is that just because your experiment proved your hypothesis wrong does not mean that the experiment is over. Same with if the test proves it right. Think of it this way:

The fun of marketing isn’t just in creating the pretty graphics or designing web pages. The fun really starts when you start taking what you are doing, testing something new, improved, or just out of curiosity and seeing what works or doesn’t work. Experimentation is the second part of the marketing equation and should not go unnoticed. It’s about time that we set our course full speed ahead to the never-ending cycle that is testing.

With the official announcement that NBC is killing the Jay Leno in prime time “experiment,” I’m...

The Opposite of a Remarkable Experience

Seth Godin got’s a great example of how the little things kill a client experience – the opposite...

How To Create A Strong Hypothesis

Last week Henry Cipolla, cofounder of DemandSage, joined us for an episode of The Black Line...